And the winner is Michelle Obama? 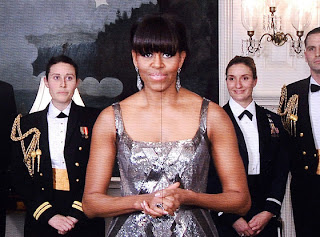 Hollywood and politicians have made strange bedfellows from back in the days of Charlie Chaplin whose independence sealed a lifetime beyond the cherished reels and busy work of the war lords consigning him to distant shores until the final redemptive days. You are either with us or against never upon us.


Lord Louis B. Mayer gave the Republican Party a say in the 1920s in building a solid propaganda machine. Edward G. Robinson fought Nazi’s – Ronald Reagan and George Murphy darlings of the high flying right served as presidents of the Screen Actors Guild. Depending on which side of the aisle you inhabited, politics of the day influenced the type of movies being made. We went from gun toting Vietnamese slayer John Wayne in ‘Green Berets’ to Jane Fonda’s Oscar win in the anti-war ‘Coming Home.’
Last night’s appearance of Michelle Obama although predictable did come as a surprise. When I first caught a glimpse I knew political interference was in play but willing to abide the show.


Obama is probably the most elegant well-spoken first lady of our times. She exudes perfect health, ambition, opulence, beauty – the impossible woman. She is style central; in fact last night in her Naeem Khan Gatsby era art deco dress she put the entire flock of starlets to shame. I ask? Should this be the case?
Jack Nicholson is the real deal but up against Lady Obama he looked like the guy who missed the last bus. In fact, he looked like he couldn’t afford a token.


I think where I’m going with this – I found it a truly uncomfortable moment and not for anything Seth MacFarlane might have said. It’s that spooky mix of Hollywood and Washington politics that leaves me dry. Separation of Hollywood and State?
I’m an old lefty so for me to fess up to this takes a bit of reflection. I never liked the stink of Chuck Norris hanging around or gun-crazed Charlton Heston, so in all fairness, beautiful – gorgeous perfect First Lady – rethink these spectacles. Please don’t make this a habit. Your words were too completed and cultured – remember America eats at Denny’s and parents work a dozen menial jobs a day and can’t afford ten sequins on that dress. We know Ben Affleck was gobsmacked by your cameo – but remember, that’s the guy who couldn’t get the Argo story straight even when Canadian truth slapped him silly at every turn. And do remember FOX News will replay and dissect and stoke their crazed club of lunatics into a Obama hate-filled frenzy – that in itself should give one pause to consider.
Posted by Bill King at 8:32 AM