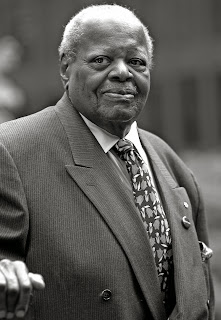 In 1962, other than a few albums, Down Beat magazine was my sole connection with the world of jazz. I purchased a subscription for an inside view of the musicians and the music they were creating. In fact, the following year a free Pacific Jazz recording of the Gil Evans Orchestra came with renewal. Those faces -- Miles, Monk, Sonny, Dizzy, Bill Evans, and my hero Oscar Peterson -- were permanent fixtures in a genre deep in superior craftsmen and staggering artistry.


While savoring an issue of Down Beat I came across an advertisement: "Win A Scholarship To Study With Oscar Peterson. “Blood soared through my arteries sending a chill the length of my body. Oscar Peterson? The fastest hands east of El Paso? The heir apparent to Art Tatum? I thought just maybe I'd be able to watch my hero play then coax him to reveal a few secrets, those which made him such a formidable pianist. There must be a jazz God! The mind began to tease. All I could imagine was my thin frame looming above Oscar's imposing presence and what seemed a 40-foot ebony grand piano with Mr. Peterson's oversized fingers striking those chords I could never stay with long enough to grasp the interior voices. I imagined saying on command,  “Freeze!” and Oscar would pause, sustain one fat 10-finger chord of sweet resonance, a sound I heard my hero play so many times before on record. He'd hesitate, then invite me to slip my fingers under his hands, time enough to commit the mysterious harmonies to manuscript.


I enlisted brother Wayne on bass and good buddy Charlie Craig on drums, recorded a demo tape then mailed it to The Advanced School of Contemporary Music, 21 Park Road, Toronto, ON Canada. Now, I wasn't ignorant of Canada like most Americans. I didn't envision a large sheet of ice transporting starving moose, forsaken trappers and disheveled penguins. In fact, quite the contrary.


When I was 12, I'd begun collecting travel brochures from around the world with just one lick of a three cent stamp, an envelope and superb coaching from National Geographic. Within months I had a box of glossy brochures from places as distant as India and New Brunswick. Canada's landscape seemed far more manicured than America's, like a place where Arnold Palmer could drive a golf ball along 3000 miles of exquisite greens, from Nova Scotia to British Columbia.


A few weeks passed before I received a Western Union Telegram announcing I'd won a partial scholarship, half tuition paid. I was gone after that. I envisioned shaking Mr. Peterson's hand and some magic current passing between us that would transform my fists into flaming fireballs.


My parents agreed to let me go, allowing me a month-long reprieve as long as I could find lodging with other Christian-minded individuals in Toronto. An elderly couple living at 11 Curie Avenue off Coxwell Avenue offered to house me for a fee. Over two years I had saved nearly $700 dollars playing the music of two Glens, Grey and Miller, with a 16-piece dance band, mostly at Catholic dances and functions. One hundred-twenty five went to the school, $120 for lodgings and $20 for my wallet. The rest remained securely in my bank account for school.


When we crossed into Canada, my father acted as if we'd entered the Twilight Zone. Cars passing at a swift tempo, and right on red totally screwed up his sense of law. Downtown Toronto, bustling with trolleys confused him so much, he vowed returning only long enough to retrieve his son. My surrogate guardians resembled an English version of Andy of Mayberry. I had my own Aunt Bea to upset. In fact, breakfast compared to something starving crows would plug their nostrils at before downing. Orange marmalade on toast and what looked like the half-baked yoke of alien fowl.


I was totally nervous the moment I entered the brick house which was school, across from where the Hudson Bay Store now resides. To me it was an address of mythic invention. This was the house where Oscar hung -- Ray Brown, Ed Thigpen and Dizzy would drop by, a place where the elite jazz community held the secret jazz codes to fluid articulate improvisation. Day one, we were separated into groups, A, B, C, and D and given a decisive ear training test. I swear, the changes went by so fast I thought I was listening to a Shostakovich symphony. It was only when a medium tempo blues rolled by that I began to identify the form. Oscar confessed the opening salvo was no more than rhythm changes. Anyway, I was only 16, the next-to-youngest body on the premises. A thorough grounding in theory earned me placement in C group.


The next few days were given to lessons in ear training and theory. Ray Brown and Ed Thigpen were constant company. I became so immersed in music I'd practice eight hour days, then drag my tired legs across town to Aunt Bea, who by now was less than enamored with my erratic schedule. I didn't see Oscar again until the second week when this navy blue Mercedes convertible pulls up. The only other juvenile on the premises (a terrific drummer from Minneapolis) and I slipped out back and examined the master's ride. We were awestruck. I'd never had seen such luxurious creamy brown leather in an automobile before, especially in southern Indiana where everyone drove Chevys and Fords. The interior looked to me like an expensive item of European furniture.


When Oscar finally arrived, a lump lodged in the pipe of my throat. I thought of all the things I wanted to say to my hero, but stood there like petrified lumber. I thought about the hours I spent locked to the charming harmonics he'd scripted for the West Side Story album. Those arrangements! I wanted to see the manuscripts. More than anything, I just wanted to see where Peterson's fingers lay when they made such glorious tones.


It wasn't long before I learned Peterson didn't teach as much as inspire. He'd play a few passages, then speak about the process. It did nothing to alleviate the frustration building in me. I had in mind a visual statement, something I could see and apply. It didn't happen. His hands were faster live than on record. What I did witness was positions. Places where thick chords began and ended.


Classes passed much the same until I trapped my hero in his ground floor office. I spoke earnestly of my admiration for him and asked for other music to enlighten the heart. Oscar graciously pulled a recording of Claire Fischer called Surging Ahead and Junior Mance's Live at The Village Gate for me to delve into. He said Mance played the blues like no other and Fischer was on to something he found riveting. That was all I needed to hear. Those few words were enough to throw me full tilt into jazz.


As the month passed I quickly ran out of my small savings and began walking the distance to and from school. Although trolley fare was no more than 14 cents, I spent my savings on restaurants, something I had little experience with in my home town. I walked the barren streets of Toronto through the folk-crazed haunts in Yorkville sipping the occasional lemonade. A vacant parking lot across the road entertained a barn-like structure I would soon learn was a popular jazz haunt called the First Floor Club. Due to strict liquor laws, the fire escape of the First Floor Club was the only vantage point I was allowed a view of the world inside a Canadian jazz club. One glorious evening I peered through an open window for hours watching pianist Lennie Tristano serve up what seemed to me Bach playing jazz, on the metal staircase. Another Sunday afternoon I slipped in for a jam session with Archie Alleyne and Kenny Baldwin only to be tossed half-way through the opening strains of some unidentified song.


I lived and loved jazz. I also relished my third floor private study where Ray Brown would unexpectedly invade with his bass and try his best to confine my hands to the middle section of the keyboard, in an effort to correct my scattershot tendencies. Brown knew I was searching for the mysterious sounds the great one kept inside and it was only a matter of time before I cracked the code. Brown's patience and advice paid off. By the time I left there I was hearing intervals and harmonies I'd never understood before.


It's been 37 years since I lived such a carefree summer but the memories remain as vivid as daily life. I've mentioned it to Oscar on a couple occasions and to Ray Brown, who first mumbled and then sipped from a drink. Before I walked away he said "What did they call you back then?" I said, "Louisville." Brown paused then said, "I remember you, you don't look the same." I hope not. Back then I was a borderline nerdball like most other teenage musicians, living and breathing music and just finding my way in the big city, one that now seems more like a village. All the same, it was a childhood dream, one fully realized. A real hero, and a real believer.