David Murray and Macy Gray (The Big Voice and 21 Instruments) 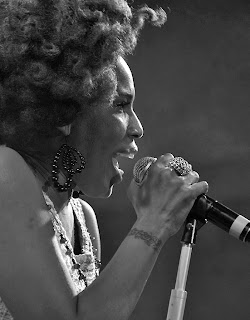 
David Murray cut his reputation around the edges of jazz – free jazz, avant garde and post bop. Macy Gray – rhythm & blues, soul and hip hop. At the core of all of this is - rhythm, blues, improvisation and the big bandstand – a place where kindred souls unite and delight.


Ella Fitzgerald – never stopped exploring and embracing musical partnerships to the point of actually finding a greater audience for her collaborations with Louis Armstrong; Duke Ellington with John Coltrane, Stan Getz with Joao Gilberto, even Tony Bennett with Lady Gaga.


So what makes this collaboration work?


I suspect it’s the fact that a band this size loaded with arrangement possibilities can fuse a singular distinctive voice to unify and complete the wall of sound. Murray in many ways borrows from the Charles Mingus/Ray Charles on the spot arranging playbook. Yes, there are specific parts but there is also ample room for improvisation. Gray has a personable style - once heard, the voice is easily recognizable. This is something all singers and players aspire too.


Murray can attest to being on more than 150 recordings. Born in Oakland, California Murray’s initial influences were free jazz musicians such as Albert Ayler and Archie Shepp. Players of his generation closely mimicked John Coltrane – whose ‘sheets of sound’ – rows of scales and modes played at a blistering pace became the playbook of the time. Murray instead looked deeper in the past to seasoned players like Coleman Hawkins, Ben Webster and Ellington sideman Paul Gonsalves whose approach demanded adherence to scripted melodies and themes with considered embellishment and methodic improvisation.


Murray was a founding member of the World Saxophone Quartet with Oliver Lake, Julius Hemphill and Hamiet Bluiett. Murray was named Musician of the Decade by the Village Voice in 1980. He also earned a Grammy Award in 1989 in the Best Jazz Instrumental Group Performance category.


Holding a big band together any significant stretch of time is a major accomplishment. Ellington and Basie managed for decades but lived near financial collapse doing so. Rob McConnell and the Boss Brass had to slim down to a Tentet in the latter years to extend the life of the arranger/band leader’s well oiled and tenacious ensemble.


Macy Gray traveled a different route one that followed a mainstream path through the heart of pop culture. Five Grammy Award nominations, appearances in a number of films and a monster single “I Try,” two Grammy Awards and 15,000,000 units sold lifted her from a crowded field of hopefuls garnering Gray a multi-platinum album ‘On How Life Is.’


The movie thing worked well for her as the recording situation became more complicated with roles in Spider Man, Training Day, Scary Movie 3, Lackawanna Blues, Idlewild, and For Colored Girls.


Gray also appeared on the soundtrack to Oscar film winner Chicago with Queen Latifah; a duet with Zucchero called Like the Sun, which featured guitar whiz Jeff Beck; collaborations with Natalie Cole, Fergie, Justin Timberlake and will.i.am. The first single from Gray’s fifth studio recording The Sellout, Beauty in the World was used as the theme for videos promoting Microsoft Internet Explorer9 and in the ABC series, Ugly Betty.


Jazz doesn’t get any more engaging than this!