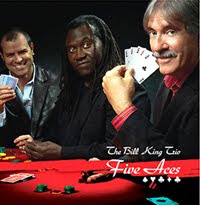 It was the summer of 1963 when I earned my first lesson in the blues from piano giant Oscar Peterson.

I was sitting nervously in Mr. Peterson’s office at 21 Park Road in Toronto with a head full of questions. “Mr. Peterson – what should I be listening too.” I do remember a slight tremble in my voice. This was my musical hero - one big imposing presence. “Bill, you’ve got to learn how to play the blues – it’s in everything.” Peterson paused for a moment then reached behind and pulled two LPs. “This one is about the blues – Junior Mance at the Village Vanguard and this one is about things to come – Claire Fischer - Surging Ahead. Peterson then points to the Vanguard album and says, “If you want to play blues piano – it’s all there. Just listen!”
When I returned to Louisville, Kentucky after six weeks studying with the master at the Advanced School of Contemporary Music, I went on a serious hunt for both recordings. Magically, I found both.

As soon as I was safe at home I dropped the needle on the first track of Mance’s blues declaration - ‘Looptown,’ nice - but way too fast to comprehend – then ‘Letter From Home,’ now we’re talking, and finally ‘Smokey Blues’ - a blues that builds from an ember to a firestorm – something I could transcribe. I heard it - every phrase; the storied territory between the notes - the place where the blues takes shelter – and fell madly in love.

As the years passed I would discover Booker T. and the MGs on a jukebox at Indiana University in Bloomington, Indiana sounding ‘Green Onions’ – Little Anthony and the Imperials ‘ Hurt so Bad’ on the radio. I couldn’t get enough. Then it was the bands I played with -The Shadows and the Chateaus and Cosmo and the Counts – nothing but the blues – Bobby Bland, James Brown, Travis Womack and Lonny Mack.

Then one day I was on the road like the old guys – Southern California, Greenwich Village, Jersey Shores, and San Francisco. “Hold on I’m Comin’, Midnight Hour, 634-5789, I Can’t Turn You Loose.” Otis, Ray, Carla, Aretha, The Four Tops, Vanilla Fudge, Free, the Rolling Stones- the greatest era to be a living musician and I was a traveling student.

‘Five Aces’ is my recollection of that time and a tribute to every keyboard player who memorized those ubiquitous parts. With bassist Collin Barrett and drummer Mark Kelso at my side I feel we capture a sense of what it was like to be emboldened by a sound that claimed the best of soul, gospel and rhythm and blues with a sprinkling of jazz that empowered a cadre of talented players to invent something so incredibly powerful it spilled over decades later to the young players of today.
Oscar got me rolling; Junior made me sound good, the bands gave me experience and late great Canadian keyboardist Richard Bell defined gospel piano playing for me. Love and respect you all!