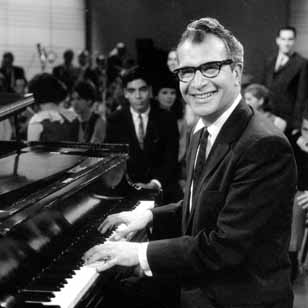 
O.K. the jazz guys always questioned his jazz credentials…the man isn’t Bill Evans or Bud Powell - not as hip as McCoy, as quick as Oscar - but man does he have fans.


I always felt this giddy admiration and satisfaction with the fact that he sold more recordings than all of the validated abstract jazz heroes of the time. Brubeck connected!
My dad brought ‘Red, Hot and Cool’ into our living room and it played more often than Elvis on radio. Folks were screaming in the streets gyrating like sinners at a forbidden after hours hotspot. We were wrapped in West Coast cool….. sweet smoldering grooves. Then one day pops buys me this Brubeck book for piano that has ‘The Duke’ and ‘In Your Own Sweet Way,’ enough to make a fifteen year old boy shiver with delight.


Years flow by and then “Time Out’ blows wide open. ‘Take Five,’ a time signature more akin to riding the beat of a five legged elephant becomes the rage.
Brother Wayne and I memorize and are invited to play WHAS telethon `Crusade for Children` in Louisville, Kentucky with house band. As soon as curtain rises I count song in and drummer falls into  steady four/four pattern. Now, this would have thrown somebody with experience. For us it was television and we strapped in like high flying novices intent on getting to the final bar. Oh what relief. The drummer apologized and stated nothing had been more challenging and frightening.


I’ve always loved the fact that Brubeck was oblivious to criticism and knew who his fans were.
He was always cool. ‘Jazz Goes to College.’ Now, that was the supreme test. Pete Seger was there, Dylan, Joan Baez, Miles made it, Charles Lloyd, …. You could never pull this off in 2012. This was way before genres were segregated.


One magnificent occasion in later times was the Montreal Symphony`s recording of `Blue Rondo A La Turk` featuring Brubeck and company. What more could you ask for such a gorgeous composition. This was symphonic pop jazz at it`s best.

Humility! Brubeck was to me a classic musician who exuded astonishing humility and kindness. Every photo with his family – those sons was filled with big smiling faces and so much internal respect.


In a time of rising narcissism – singers that can`t sing, players that play for themselves, juvenile toddlers that think grabbing the crotch is a free ride to the top – it is so comforting to know a man of such great talent, compassion, love of art got to do what he cared most about until the body said thanks – enough is enough and goodnight – nice tunes!
Posted by Bill King at 6:18 AM No comments: