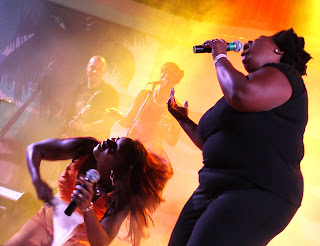 Sunday at Farley Hill National Park began with local folk/rock unit Alex M. Alex has a distinct voice one that connects yet the music being presented at a jazz festival with few boundaries felt out of place. Bone crunching guitar chords and pounding rock rhythms are no match for good taste. This may work in an alternative rock situation but on a day when people were fixated on the Caribbean pulse with a bit of smooth jazz flavor this crossed the line. Nonetheless, Alex M is a super talent. He can sing and exudes ample stage appeal. Perhaps, the coming weeks and months focused on songwriting will bring tremendous growth.
Saxophonist ArturoTappin knows this audience. The native Bajan has played the festival many times the past seventeen years. Tappin also knows what to play and what not to play keeping the audience satisfied. He understands the jazz that pushes him to excel chasing the Coltrane, Brecker, or Parker legacy is not the one that will carry this crowd – especially after church services on Sunday. It’s dance and hit a groove time and please - no music for the head.
Tappin spends the year mostly away from the island as part of singer Roberta Flack’s touring band. He also finds time to churn out his own music and release sessions comprised of new originals from time to time.
On this day Tappin laid his elongated set out as a review featuring singers Toni Norville and Marisa Lindsay.
Lindsay – dressed in stylistic white dress surpassed her past efforts singing music more reflective of her background. It was the classic soul material that saw her reach for notes just beyond most singers range and hit them with authority.
Norville – still feeling the afterglow from her Tuesday night powerhouse exhibition sang with much the same energy but not with the same focus on pitch. There were passages in need of fine tuning.
The pairing of the two singers worked especially well as Tappin rolled the proceedings up with a heartfelt tribute –‘You Don’t Know Me Now’ to soul singer supreme Teddy Pendergrass who passed only days before.

Warren Hill has had an enviable career arriving just in time for the first Wave and then the Smooth Jazz revolution. It’s led to years of touring - numerous smooth jazz Caribbean cruises and a legion of fans.
Hill like so many other players who depended on the cross connect between smooth jazz stations that once was a road map across the USA is now concentrating on touring more than ever. The latest unit may be his best. It’s everything musical you could want from a pop jazz ensemble. Strong curious melodies – thundering rhythm and marvelous interludes. Hill is a seasoned performer who carries himself like a veteran on stage.

Even more desirable than a ticket for Smokey Robinson, which was from this eye half sold – Kenneth ‘Babyface” Edmonds was the artist most on people’s minds.Every act on Sunday had the feel of being mostly background music in anticipation of the one-time can’t miss hit maker.
Babyface earned his name as a member of Bootsy Collins band in the early days of his career as a sideman. Edmonds would quickly score writing credentials with hits for Bobby Brown, Karyn White and Paubla Abdul. It was the monster hit – ‘End of the Road’ recorded by Boyz 11 Men that earned him iconic status. Then came number one hits – “I’m Your Baby Tonight’ and “Exhale (Shoop Shoop) ‘ for Whitney Houston that would lead to three Grammy’s for producer of the year 1995-1997.
Where Saturday night’s crowd was packed with late teens and early twenties – Sunday’s crowd showed its age. Babyface is now in his fifties and so were many in attendance. These were songs people played getting to know one another as the love lights dimmed. You don’t forget those moments or tunes that enshrine those rare occasions.
“Why he still looks like Denzil Washington’ was the verbal assessment expressed in the seats surrounding me. Face is definitely a female attarction.
Babyface didn’t disappoint. The moves are there – the posing – the clean suit – the handsome manners and so was the not so polished singing. This is a writer with moderate vocal chops reaching for Whitney’s notes missing by a wide margin yet that’s not what people absorb. As the rains came – and it did pound the grounds – several couples found refuge under umbrellas - embraced and reveled in the slow grind. Eventually, the pitch black night sky surfaced as the heat of afternoon partnered with the rain to administer a round of Sexual Therapy.
Year seventeen now a pleasant memory and contemporary Barbados at hand I wish to acknowledge those that made this lovely excursion a welcome retreat from the cold winds that chase the body most days up north. Thanks to the many delightful friends at Barbados Tourism Authority – Ruth Phillips, Avril, Maggie, Diana, Stacy. Producer Gilbert Rowe – Jacqueline Wiltshire Gay and all of you who made this visit such a joy.
A special thanks to the Bougainvillea Beach Resorts who always make our stay an occasion to remember – our friends at the Mount Gay Distillery, the Fish Pot Restaurant, Zen , and the Waterfront Café.
Bill King
Ejazznews
Posted by Bill King at 6:52 PM 1 comment: