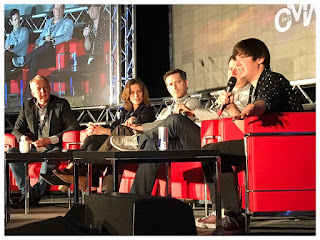 Last week in many ways shed a bit more light on the future of podcasting and streaming. The fact is, the tech world never stands still and the tools keep getting more user-friendly and with that comes change and confusion. Here is a synopsis of five events I found most enlightening.

Panelists contend that the narrative podcast is more potent than television, as the imagination is more active when listening than watching. And the next wave - contextual radio streaming, with the internet broadcasting real-time music, news, stories and local information - is here. Listeners will tune into radio longer hours as it returns to great storytelling and individual topics of importance and interest. The automobile will be a paramount location for "driveway moments" - staying in your car until the story fades. Listeners will self-design their own apps, and a new language, consisting of terms like EFFT, RDJD, GEO Soundscaping, Assisted Intelligence, Voice Triggers, Spatial Storytelling will be absorbed and practiced. - Bill King

Growing the Pie: Will Streaming Do?

Loading up on apps is outdated; at least that’s what the esteemed panelists addressing trends and innovation had to say. We are about 5-to-10 years away from sorting out the pie to a fairer pay system that will eventually serve artists, labels, creators and product managers. Since 1999, the ground that has been given to services like Napster and tech companies is only now beginning to be made up. For every dollar SOCAN collects, another remains uncollected, emphasizing the importance of registering with collective management organizations around the world. Rates from streaming services like Spotify - which pay top dollar to the most popular artists and pennies to everyone else - need to be renegotiated. One bright spot: indie artists have the tools, blueprint, and more platforms and avenues to positively determine their own future. Your horizon is closer - Bill King

From the Pod - Casting the Net to The Future

Podcasting To Millions: Podcasting is no longer the unrefined cousin of terrestrial radio. In the U.S., 42M people tune in weekly to podcasts, and that number shoots up to 67M listeners on a monthly basis.The key attraction is good storytelling from an amiable, well-spoken host, schooled in their chosen field, with Amplifi Media's Stephen Goldstein stating: "People don’t watch crap on TV anymore. Personal control is the big change - the same on radio as it is on television.” It's determined that podcasts draw 15% of a U.S. audience that listens weekly, wherein Canada it's 15% of those 18+. In Canada, The Humble and Fred Show gets downloaded 12K-15K daily, running sponsored promotions ranging "product in hand" fan endorsements through social media platforms Instagram, Twitter and Snapchat. Sponsorship and licensing fees supply the main revenue. “We live in an on-demand – customizable world. People want to listen on their own schedule,” says H&F's Howard Glassman. Globally, 10B podcasts were downloaded in 2016. - Bill King
Streaming Sharing, Stealing

Why Steal When You Can Stream? Carnegie Mellon University professor Rahul Telang singles out data as the key to becoming a dominant player, confirming that with such series as Netflix's House Of Cards and the movie star appeal of Kevin Spacey, the linear way of watching TV is over.Telang also claims that streaming services have had a negative impact on piracy because free content discourages stealing. Defining the "4 P's" as product, price, placement, and promotion, Telang says Netflix understands the public tolerance level for streaming service pricing. Studios have caught onto data value and are now limiting sharing of info on such streaming hubs as Spotify. The challenge for all is identifying your audience. - Bill King

Standing on the Platform
Platforms are unifying public and private radio stations: With the launch of Radioplayer Canada and iHeartRadio Canada, radio needs to be where people are and integrated on all platforms. Rogers' Julie Adams says, “it’s about agreeing on technology and competing on content." The UK-developed Radioplayer app brought public and private broadcasters together at the dawn of streaming's popularity, offering a standard web player to make the listener experience easier.iHeartRadio Canada boasts 100M+ listeners and 120 platform integrations, division head Rob Farina said, adding that the brand wants to reach the consumer on the platform of their choice. Cars are the next frontier and the medium is still advertiser-driven.When it comes to teenagers, Zack Sang & The Gang, heard on 75 stations across the U.S, is one of the most successful in grabbing their attention.
“It’s a big thing for everyone, making sure your brand lives 24/7," Sang says. "Digital opens this up. Not all content put out there is solely audio. Content will always be a priority. People want somebody they can follow. They want a pulse, something real on the other end.” - Bill King