A Conversation With .. Steve Anthony 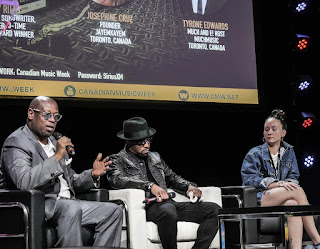 11:00 a.m. - Spotify Master Class:
If you are a musician, you’ll either love or hate Spotify. The chance to get heard by millions is seductive. Royalties? Negligible! Then, why should you supply your fruits of labour to a site that harbours billions of recorded tracks and adds new ones daily? It depends on your needs and aspirations. Spotify’s Nathan Wiszniak – Head of Artist & Label Marketing - broke it down nicely during a 40-minute early morning session. He said that Spotify is much more than a tap-and-play entity: It expands and adapts to musicians' needs. Wiszniak's tutorial advice: build your followers, socialize, tease new content, brand your playlist, empower fans, share with followers, include audio ads, keep content fresh, go viral and embed it on your website. Just get engaged in your career and take advantage of the tools presented to you.
Wiszniak senses that the issue of artist compensation will eventually sort itself out through copyright legislation. He also keeps in mind the innovators who do the work for them. Spotify survives on serious investment capital, and for their employees, it’s no less demanding than your stress-filled day job. When wearing my radio hat, I see Spotify as the future. Programming and discovery have never been sweeter! (Bill King)

I have a soft spot for Atlanta, having lived there and been part of the music scene 1978-1979. I was able to sit down for a quick chat about tourism with Lisa Love, Division Director of Economic Development, who quickly reminded me of Georgia's impressive musical legacy.
“We are working on music as a hook to visit Georgia," she told me. "We are here to tell people about live music in Georgia and its musical heritage. There’s a rich history and incredibly vibrant scene today that spans geography, genres and generations. We have that soul and R&B musical dynasty:  Ray Charles, Otis Redding, James Brown, Gladys Knight. But we also had Gram Parsons: Americana would not be what we know it to be today without Gram Parsons. There’s iconic songwriter Johnny Mercer from Savannah; Norman Blake, one of the greatest flat-pickers and roots musicians and we have the ‘Mother of the Blues,’ Ma Rainey. Georgia has helped shape the fabric of American music.” With local Atlanta artist Alicia Bridges scoring a massive disco hit in 1978 with “I Love the Nightlife," how could I ever forget the blazing backroads of Georgia? Windows down, radio up, roaring around in my red Camaro. There’s also Cameo, R.E.M., Dixie Dregs and Peabo Bryson, The B-52s, The Black Crowes, The Allman Brothers Band, TLC, Ludacris, Usher, OutKast and on and on... Visit: ExploreGeorgia.org (Bill King)

Hip-Hop has been around a good 45 years, displacing rock n’ roll some 20 years ago as America’s music. Along with a groove and attitude to counter once-prominent genres, hip-hop doesn’t need to curry favour with traditional avenues of exporting music. As the rise of hip-hop and the technological revolution runs parallel to each other, they continue to aide and abet one another. Any aspiring producer can record from his bedroom, mix, master and drop it on the public on a whim: an artist and a few inspired/enterprising friends can easily mount a campaign, collect emails, market and sell.
“I feel when artists put their music on the internet and not monetize it, they are just giving it away, and the track could be a hit,” says Teddy Riley, Father of the New Jack Swing movement of the late '80s/early '90s. “For me to have over 1000 records in my catalog, I never gave anything away.  If I did, it would be for a favour.”
Andre Harrell, Revolt Media & TV's vice-president, said the hip-hop industry is on the rebound.
“When album sales went down, the business lost a lot of money. From 2001 – 2010, those were lean years. It’s just starting to be profitable again, based on streaming. We are getting the monetary part right. Now, we have to figure out how to get the creative part right and make great albums,” he notes. (Bill King)

Talk about a stark contrast between worlds: Hip-hop is all swagger and confidence and certain of their audience appeal. Radio, not so much! As Caroline Beasley, CEO of Naples, Florida-based Beasley Media Group and owner of 63 radio stations mentioned, terrestrial radio has been losing audience share the past 20 years. Advertising dollars that flowed so easily into the coffers of most listened-to stations is now divided up over numerous platforms with Facebook and Google being primary competitors. “Money is the best way to measure the health of the industry,” observed moderator Sharon Taylor. “Is radio making real dollars like it did 20 years ago”?

Corus Entertainment's Troy Reeb begged to differ.
“On an individual basis, revenues are going down," he declares. "If you look at terrestrial radio, it’s dropping by a couple points every year. On average it will tick up and then go down, but it’s in decline. That’s not surprising: We are in a world of fragmentation and everyone has a myriad of options in how they consume content."
A decade ago I could ask how many in this room watched this show at 9 o’clock and half the room would have put up their hand. If I asked how many listened this morning I’d be hard pressed to find a large number coalescing around a single source of entertainment.” (Bill King)

Choosing which forums to cover is a hit-and-miss adventure. Often, intuition and guesswork pay big dividends. If there was one session meant to be attended, this is it! Keynote speaker Bob Hoffman, a partner of Type A Group, an advertising and marketing consulting agency, spent more than 45 years in ad agencies creating campaigns meant to snag consumers and tether them to a product. In 2018, the battlefield is littered with the ad campaign "dead."
Reminding us that 85% of real dollars are in the accounts of those aged 50 years and above, he states that few agencies have anyone working in them anywhere near that age. Social media advertising? A bust!  Ad-blockers shut down your media buy, bots intercept, steal your purchase data and trash your buy. As Hoffman says, “We live in the age of delusion.” Retail sales? Only 2.1% occur through your smartphone, and you're getting five clicks per 10,000 on the display ads. There are 30B fraudulent ad impressions a minute, claims ad fraud researcher Dr. Augustine Fou. So, what remains the best buy for your advertising dollar? Radio! It targets the right people in the right place at the right time, and it’s the most cost-effective, claims Ebiquity, another media consultancy firm. (Bill King)

11:00 a.m. When Broadcast Meets Podcast: A Love Story?
Moderator: Matt Cundill: Owner/Host, Sound Off Podcast
Panelists: Chris Dunscombe, Director New Media, Corus Radio Vancouver – Fearless Fred Kennedy, Announcer, CFNY-FM (102.1 The Edge) – Jean-Marie Heimrath, President & CEO, The Podcast Exchange- Seth Resler, Digital Dot Connector, Jacobs Media, USA.
I’m not certain what I gained from this discussion that becomes applicable to the present situation. With over 500,000 podcasts floating about and all looking for traction and revenue, I view this region as confusing as getting on a playlist at Spotify or iTunes, and even when accomplished, who’s going to pay?
What is obvious, it’s those with something unique to offer – not just a chat about Kanye West or Donald Trump, but those small stories and passions. If you know something most don’t, you can more than likely share that through a podcast with a world of likeminded folks and build a niche following.
The forum basically spoke to those who had existing radio shows owned by big market enterprises looking to repackage and capitalize with the talent they have. As far as podcasting – they must decide if they are keeping it regional in content or going national.

Do you want a full-time job? Here it is! In today’s self-reliant climate, getting heard and getting played have never been easier and harder at the same time. The more this panel rolls out the work slate, the deeper I sink into my folding chair. What would Mozart have said of today’s demands? “Fuck it; I’m becoming a mortician! Algorithms and streams? What about bar 178 when the second viola comes in a measure too early in Don Giovanni. That’s what keeps me up at night!”

So, this panel, moderated by IRR/IMMF/UK's Jake Beaumont-Nesbitt and including MomandPopMusic's Jessica Page, Believe Distribution Service's global head of trade marketing, Leigh Morgan, and LyricFind's Catherine Fournier, came to some good conclusions: that recordings have a longer lifespan when running across several formats and music has to be supplied on a continuous basis. (Bill King)

A Conversation With.. Terry Wilkins

A Conversation With.. Leah Daniels

The look in Daniels' eyes is that of a young woman that’s inspired and in awe of her good friend. In many ways, their careers mirror one another. Both are fiercely independent, have a clear vision where they want to go with their careers, and are determined to get it right. Both work outside the walls of a major record label and connect directly with their audiences.
Kay rocked it on America’s Got Talent and Daniels took home the Canadian Radio Music Award as the FACTOR 2016 Breakthrough Artist of the Year, earned four CCMA nominations, and has a new recording set to arrive in May 2018. There’s also something else that binds the two. I keep in mind what Warner Canada Music Steve Kane CEO said to me a few years back after I posed this question about evaluating talent.
BK: Is there a checklist?
SK: Yes, there’s a mental checklist.  I’ve got to tell you at the top of this checklist – “Does this artist know who they are?” Do they have a sense of self? Do they have a sense of where they want their career to go?
The answer?  A resounding yes! Here’s that conversation.