Eric Clapton - The Chase, The Blues, the Cream! 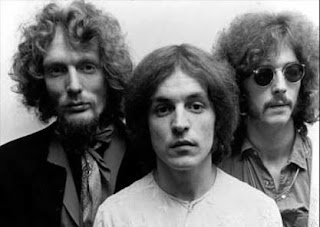 I’ve been severely chased cross country three times in my lifetime by recordings, the first – the Doors, ‘Break on through to the Other Side’ secondly, –The Blues Breakers with Eric Clapton and thirdly the Beatles , Sergeant Pepper’s Lonely Hearts Club Band.
The mid 60s, The Doors were resident house band playing Gazzari’s on Sunset Strip long before success and Break on Through was just getting hold of local radio. I was trying to get into Local 47 Los Angeles Musician’s Union so I had to do all sorts of weird calls during the six month probation period - one being – picket the Doors. Gazzarri’s was a non union establishment. The gig paid $16 a night so I went with it. First night on strip I’m joined by a singer/actress Lynn Carey - Mama Lion. The picket thing quickly became a diversion - Mama Lion - main attraction. This woman was voluptuous in every manner. The Door’s – who gives a damn, – the Lion ruled. Mama had more followers than Jimmy Swaggart. Any intentions I may have had got swallowed in the surrounding crowd. By 1971 she was a Penthouse go to playmate.


I had a habit of traveling across America and following the hippie trail. My pockets were empty and accompanying me a Farfisa organ and amp – a few clothes and no coin. It didn’t matter which small town or sleepy city I crossed the Doors were breaking all around.
Heads shops were popping up like newly minted super market chains. I’d drop in get my bearings and inquire about the local music scene. Playing in the background far from mainstream radio – John  Mayall’s Blues Breakers with the champ of blues guitar Eric Clapton.


This was stone cold - one of the best recordings I’d ever heard; jazz, blues, rock whatever. Clapton had a killing sound and the backing band, serious groove. John Mayall had one sweet blues voice. July 1966 was pure magic.
The Blues Breakers cover is eye catching. Evidently, Clapton was in a sour mood and began reading a British children’s comic, Beano. That capture gave Clapton stand alone mystery man appeal one that would stick the coming years.


Clapton played a sunburst 1960 Gibson Les Paul Standard a sound that would shape the future of rock and roll. Gone was that Duane Eddy twang, thin picking style in comes full throttle overdrive. I’d only heard one guitarist before Travis Wammack come near. Wammack played our high school gymnasium back in 1964. He put the small amp in overdrive and blasted away at his instrumental hit ‘Scratchy’ then rolled around the floor picking with teeth then up behind the back ‘Distortion Pt.1.” Wammack would move on to be Little Richard’s music director from 1984 – 1995.
I arrive in New York City totally unclear where the future lie knowing I’d have to move quickly to stave off homelessness. I hooked up with some street musicians who began showing me the ropes or how to avoid the use of rope. I walked night after night – club to club. On one occasion I hung front of the Café Au Go Go, the basement night club -152 Bleecker Street and saw that a new British band called The Cream was making its big club debut.


I had already purchased Fresh Cream in a super market in South Los Angeles a few weeks before and burned the grooves to the core. I was working with this duo Roy and Don playing a few soul venues. Roy could sing like Joe Tex – Don couldn’t really get a grasp of Steve Cropper but was always near. I dropped by their parent’s home and popped the disc in place. The album roared. Don swore he was tossing his guitar to the curb Roy, couldn’t get a read on it and just attacked the singing. Me – I’m bled Clapton.
From September 26 to October 1, 1967 the Cream were holed up at the Au Go Go. I kept going back night after night. It was full frontal assault. Ten Marshall amps stacked no more than twenty feet from patrons all sitting like parishioners in church pews. Clapton wore a tan rawhide fringe jacket. Did that make an impression? I went shopping the following day and located a knock- off at the Mercury Gift Shop lower East side. The gift shop was my style central. I could get a Nehru shirt of my own design done in two days and wear on street that night. That kept heads buzzing and hippies ordering.

The Cream gave you thirty to forty minute jams propelled by the fire-bombing semi jazz drumming of Ginger Baker. I studied him with intense observation – followed his eyes and warn myself never go near. There was an explosive vibe on stage understating there could be spilled blood if egos got seriously juiced.


Much like the Blues Breaker cover Clapton seemed oblivious and just did what he always did – drive those vibrating strings deep past skin through every person in attendance. Jack Bruce played more bass that most of us associated with rock – but this was evolution and it made perfect sense.
I had no idea Clapton sang until he cut into `Crossroads`. Up against Bruce`s piercing vocals Clapton’s seemed weak and near buried under the weight of electric force. Still to this day, I don`t know how I survived the bombardment but it was extraordinary.


I`m working with this soul band from Brooklyn and decide the guitarist should have a clear view of the future so I invite him to join me night three. Jack Dina was notorious. He was bred on Memphis soul and knew every Steve Cropper lick and how to studiously apply. Dina was also crazy nuts. He could sing and he could frustrate and instigate. He drove for the mob and did many unsavory things which I wasn`t connected too and over the top hilarious.
He`d arrive late at nearly every gig after a stop in Brooklyn for the ‘boo’ – or hash or other head clams. It`d take him a while to settle. Once in the pocket he moved in a twisted tight manner slicing the Telecaster cross the rhythm pocket. He was manic but perfect. He could sing like Wilson Pickett and keep the stage in fits. He was big laughter sporting a Brillo head of red wiry hair and protruding chin like a cartoon mafia Don.


I really thought I could tame the chunk of burning coal long enough to appreciate the Cream.


Dina arrives late but fully loaded with drink and drugs. He`s loud and funny and set for the kill.
I scam seats two rows front of a few minutes before show time.


`Why the fuck so many amps on stage – I thought you said this motherfucker can play – it looks like a music store up there. Is that shit for sale?`  Dina then goes deep into himself laughing at his own observation.
By now, I`m getting fully embarrassed, when Dina starts talking to the drum set, amps and most anyone nearby ripping the band before it arrival. “Ì bet they don`t play any Sam and Dave,” he says.


I tell Jack I have to hit the men`s room and back soon. I slip into a dark corner of club and watch Dina fidget around when suddenly the band centres themselves on stage. Dina starts throwing barbs of which they ignore until Jack Bruce has a few words. Dina then looks back, big chin bouncing a satisfied smirk certified he`d gotten a righteous response.
The band kicks in at maximum volume - Dina near flat lines. I see Jackie’s head tilt and slide safely below demarcation then nod approval. He then points at Baker and gestures a couple improvised drum rolls - suddenly stands up and screams `Clapton you suck!’ – Dina’s head rises, lips quiver then a mammoth eruption of puke rockets above the front row. Holy shit! – I couldn`t believe I witnessed. Sooner than expected Dina starts stumble walking down the aisle covering both ears - holds balance until at entrance. He then looks back – waves, slips the middle finger – ‘You suck, Clapton!’- this is my gift to you. Fuck you all.’


We’re standing outside the club and I’m speechless. ‘Billy, I know you meant well bringing me down here to hear this shit – but that band don’t have no soul. Where’s the fucking beat?” Nuff said!
Posted by Bill King at 8:38 AM