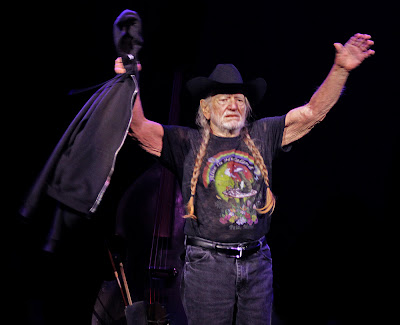 
I’d never seen Willie Nelson live before or photographed. So last night was one of those occasions to chalk up as another-being-there moment, in a life time of being there or nearby.


Nelson in the flesh is much the same as Nelson on video, television, film or however he appears only the flesh is maturing. Eighty brings old skin – snaking river lines that lay down way to many grooves from neck to feet bottoms. This is the stuff the cosmetic industry tries to banish – sorry, but when you’re old – you are old – just like every other aging in-their-time living cell toy on the planet. I see it ever day I pass a mirror on the way to the hair brush. When you’re young you are so pretty – when old – you collect physical remnants of time. If you dress them as neatly as Joni Mitchell – you’re the eternal dream girl – Willie? You’re the guy in need of a change of clothes.


Beyond the rough stuff of aging Nelson was purity – the voice of Texas – the sun-belt. There’s chunks of crushed gravel in the throat – not from a falling building, partially made driveway or developing mall – but from years inhaling the dust and broken rocks the side roads of forgotten America. There’s plenty sorrow in there, drinks that stink and boil in the stomach and one nighters – most forgettable a few playing in reoccurring dreams.


If  you’ve ever hitchhiked the southwest or anywhere you remember the close association with the ground beneath your feet, the air that stings and cools, things that rot cross the road and those that run alongside the endless highways dodging death. You spot the occasional pumping arm of a distant oil rig - black tool working to a regulated beat.


This is Willie’s world and it’s transparent. 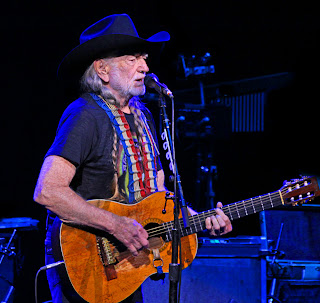 
From the first grinding chords and splintered blues strains Nelson was pure Nelson. You Were Always on My Mind. Then a succession of short takes - hits housed in medley form -three songs and seven mini reminders of the songs that brought him fame and lasting employment.


Much like B.B. King the tour bus will be home until time puts an end to the long drive.


You wonder why players of this notoriety and acclaim still sequester themselves in a minimum feet of space and sleep to the soundtrack of wheels a spinning and then you realize they were born in a time of six nighters, back slapping music lovers in every small stopover, real people who love you for just being and singing about them. It’s a human narcotic – more addictive than crammed stadiums more sporting event than natural and a sensation that never lies or lingers past reality. 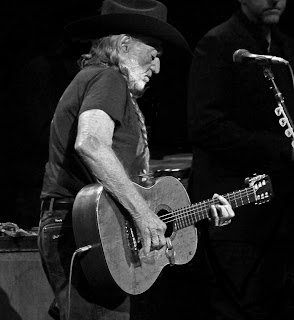 Drive on Willie!
Posted by Bill King at 7:07 AM