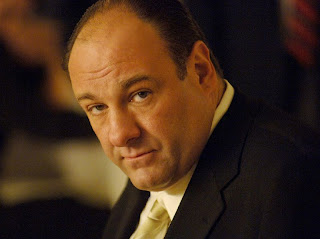 We watched the Sopranos religiously, in fact it was the first series we watched in succession and couldn’t ever cool off the remote.

The show inaugurated our current habit of watching a favourite series back to back with no consideration of outside programming. This is trans-formative in that we now have options and the Sopranos broke new ground. Where did we go after that to feed the Jones? ‘The Wire.’ Who was the same culprit – writer David Chase.

Time spent with Tony was much like waiting for a death mobile pick up. Death could occur most anytime and you rarely had options. Family guy? Oh yes, every morning Tony would lumber down the paved driveway in funky housecoat – pick up newspaper, wait for house to erupt or an urgent call from Pauli Walnuts or Silvio Dante.

We’d witness wife Carmela get kids ready for school – normal suburban children – just playing the good wife, understanding she knew exactly what her husband did and how important it was to believe Catholic, and stay the course. The perks were plenty!

I don’t know if anyone loved Tony other than suffering Carmela and a few playtime cronies but it was sure fun hanging with him at the Bada Boom Club (bada bing) and corrupt work sites. The psycho analysis was absolutely riveting - the place to get a read on the stuffing in his head.

Tony’s mom! Now that was one scary babe. When she croaked there was a sigh of relief. Mothers everywhere rang the toll bell.

Sister Janice – we all disowned her and her cloying games.

Those episodes with Steve Buscemi – ripped – the Swag grab with Christopher and Gandhi (Ben Kingsley) – oh my – could watch over and over.

The murder of ‘Big Pussy”.. those wasted knobs that did nothing and collected paltry and vast sums to prop up dysfunctional families all based on a men’s club - an ongoing brutal frat party.

Loved every minute! Why?

Because we are chicken shits! Crime voyeurs..

You’d really have to have steely nerves; a belief the hereafter doesn’t keep tabs, those murdered didn’t torture and beat the snot out of you for eternity to live like Tony.

Gandolfini was the eye of the hurricane. He was a slow moving front that wreaked havoc every direction over and near land and outer wind speeds rarely cooled – the wreckage formidable.

It was all in the eyes, the body language. What kind of day was Tony having? Is it a kill day or just another adjusting and readjusting his temperamental son? The long empty days and hours never felt comfortable.

We did whatever Tony wanted us to do. We cruised around prowling days with him and sweated through his suffering nights.

When a person dies abruptly the shock is a shared experience. When they die at 51 it’s a stop - deep inhale moment. WTF happened reaction?
By all accounts Gandolfini was the opposite of his screen roles –Mr. Hardwood tough guy - but a shy, caring and nurturing actor. Great actors leave themselves in their roles - we remember – they move on.

For those who were close to him and those of us who can still draw him in our sleep he will truly be missed.

Health is truly all we have – dollars and cents buys us time - sometimes there just isn’t enough coin to keep the clock ticking and running smoothly. Damn!
Posted by Bill King at 6:58 AM