In Praise of the Enduring Streetcar (Toronto) 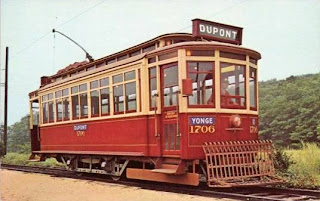 I come to my generous affection for the streetcar as a seventeen year old on scholarship the summer of 1963 to study with jazz giant Oscar Peterson.

I stayed with a Christian family on Curie Avenue and would ride the rails for 14.5 cents each way and by the third week of malts and sundaes my allotted monthly allowance was gone. The walk from East side to Park Road was a hot foot-blistering stroll early morning and a stiff leg retreat at night.

I developed this fascination with the people - the many young girls far more attractive than me. The brown leather interior the yellow/brown two tone cars.

The rails screeched and stammered – stops came with a sudden jolt. The driver was usually pissy - sometimes approachable. The older women always curious about what I was carrying under my arms.

“Music,” I would say - so proud and honored to brush against a world of abstraction and grandness.

“You are a musician like Glenn Gould?” They would ask.

“No, Oscar Peterson, the greatest jazz pianist on the planet – he’ll be in class with us today.”

The days were still, the nights prolonged. There was a quiet about the city – an Andy of Mayberry feel.

I would hang my face near the window and watch every stop and savor the radiating beauty of the many girls my age all from different ethnic backgrounds chaperoned my mothers, aunts and grandmothers. The streetcar became a golden chariot transporting dreams of things to come and glowing ambition.

The car isolates and frees us from social contact - a place to curse the world ahead. We can steer clear of that which we want to avoid and delete in life. The streetcar and subway and bus insists we meet, even momentarily and inspect. It reminds us we are humans among humans.

Travel one end of the city to the other and public transportation is busting at the seams – not just 7 AM in morning or 3:30 afternoon; but nearly every waking hour. Cars clog and damage the urban environment. I’m not against, just stating a preference. I prefer biking but that’s not always possible.

I’m sure there’s an amicable solution somewhere where planners and innovators go to meet but this is not something for a prejudiced mayor drop by with wrench and saw. This is better left with those who embrace a liveable city.

We’ve already acquiesced to the condo titans and they have deformed the urban core. The city we know and love is slowly moving towards Bob Marley’s concrete jungle – isolation and ruin. Cut another vessel to the past and we will wither in our self - contained artless hell holes.
Posted by Bill King at 1:33 PM