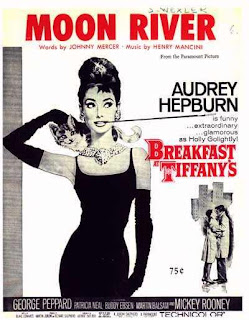 When I was fifteen I used to detest this song. I wanted more Miles and Bill Evans less Andy Williams. But this morning as I’m gearing up to record with the outstanding Gavin Hope – I’m passionately in love with this tune. It could be while working on my ode to cinema – the solo piano, ‘Cinemascope’ and revisiting some of the female stars I had a mad crush on back when I was an aspiring piano dufus has changed my perspective or maybe I’m just courting nostalgia.
Moon River was written for dream girl Audrey Hepburn for the movie Breakfast at Tiffany’s. It would go on to garner an Academy Award for composers Henry Mancini and Johnny Mercer. The great Jerry Butler would record in 1961 and it rocketed up the charts peaking at number eleven. In 1962, Andy Williams released on an album called ‘Moon River and Other Great Movie Themes – the recording would sell over a million copies. The song was never released in single format by Williams.


Gavin and I spoke early on about the song adding to a list of possibilities. A few days back Mr. Hope green lighted and am I elated with the choice. Sometimes a change of key will bring life to a song that has been heard within a certain tonal range and euthanized the masses.
I sat at the piano slowly playing the melody to get a better read on what Mancini had in mind when I notice FB friend Ian Anderson sends this stunning clip of Audrey Hepburn dosed in warm Mediterranean sunshine – a smile as wide as the Pacific Ocean - her body clothed in the fabric of eternal youth and Moon River soundtrack for all of this.


I never took to videos influencing a mental picture of a song but in this instant Hepburn won the day.
So today, when five o’clock comes calling and the Steinway has been perfectly tuned and Gavin and I begin exploring, I know Audrey will be sitting on an adjacent stool bending the brim of her hat, glancing side to side and smile as Gavin sings, “Moon river wider than a mile I'm crossing you in style someday - You dream maker, you heartbreaker - Wherever you're going, I'm going your way.”

I’ll be in a much better place than young jazz boy ever imagined.
Posted by Bill King at 6:36 AM