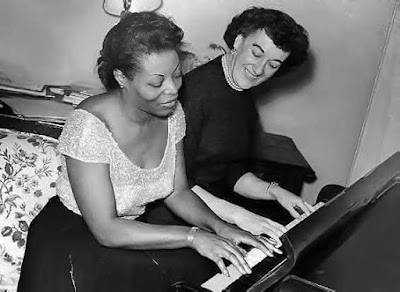 Bill King: You're in Toronto. What brings you here?

Marian McPartland: We're doing something totally new. We're recording a National Public Radio Piano Jazz show here to get some Canadian artists on the show. I think it'll be broadcast all over Canada. In the states - we've been hoping to branch out.

The fourteen years we've been doing this, we keep thinking about how to make things exciting and then decided we would come up to Canada and meet the artists here. We've had Bernie Senensky on the show and tonight John Ballantyne. Tomorrow is Oliver Jones. So we're just scratching the surface. I know there's more.

B.K: This is a first for Canada?

M.P: Yes. Last year we went to England and did it on the BBC. We recorded four pianists, and we're going to do it again in September. It's fun.

B.K: How did you come across these three gentlemen in Canada?

M.P: Through various people mentioning them. I knew Oliver already. I had him on the show several years ago. We also had Oscar. I was hoping he would be available but not this time. We'll have to catch up with him some other time.

B.K: What about your new recording?

M.P: It's an album of fourteen songs. I've been thinking about it ever since we had Benny Carter on Piano Jazz which was a couple of years ago and I've always loved his music. He's not a pianist as he very modestly says. He arranges for piano which is pretty much what he does. I was so interested in some of his songs. I just thought it would be nice to do some of them on an album. The next thought was well, why can't we have Benny Carter on the album. That's the way it worked out. In fact, we're doing a television show on Wednesday, the Today Show to help plug the album and a few other things and other New York shows coming up.

B.K: Did you work together on arrangements? He can be quite sensitive about how his songs are portrayed harmonically.

M.P: You know that. Yes, I let him. We met before the date and sat down at his house and hashed out the tunes and talked about how we'd do them. I'd already learned everything very carefully with his harmonies. I think he was pretty pleased when we came to that stage. Everything was arranged - no big arrangements - sort of head arrangements we did on the date. He would say to me, "How should we do this?" I'd either come up with some little idea I had or if I didn't have a plan, and he'd jump in and say, "Well, how about this?" That's really how the whole date went.

M.P: It was. Very easy. We did the first day with him, and he only had to do about four tunes. He was a guest on the album but wound up doing six, and then he said to me, "Well, I'll come tomorrow if you want me to."  I said, "Goodness, we have enough now." The next day we did an all trio thing. It was nice to record with Benny; I mean that's a big deal for me.

B.K: With six decades of songwriting.

M.P:  Incredible, isn't it. Some of the songs are so wonderful. The songs we picked are timeless and go back to the '30s and maybe '20s, but they still sound good today. There is one that I loved which I guess is how I first came to meet Benny was Lonely Woman, recorded years ago by Sylvia Syms, and I kept wondering who wrote that tune - where can I get it. I finally found out it was Benny and I called him up, and he sent me the sheet music. Incidentally, the lyric is written by a guy that lives here in Toronto, Ray Coleman who used to be the editor of The Melody Maker. I must try to look in the phone book and see if he's available. I knew him years ago before I ever came over here. He stayed with Memory Maker for years.

B.K: How were you able to maintain Halcyon Records and keep it productive?

M.P: It's the last of the cottage industries because we have we only have 18 albums and although they're still being distributed, I haven't done anything new for several years because I've been with Concord for about the past ten years. Almost everything I did on Halycon is still available, but now the hard part is putting everything on a CD. Oh God, I don't know how we did maintain it. We started Halcyon in about 1970 I think, and I was lucky because I had a friend with lots of money and he helped get started and then he died, and I had a choice of keeping it going by myself or quit. I kept going a little longer.

B.K: You had guests like Earl 'Fatha" Hines, Teddy Wilson and Dave McKenna on the label.

M.P: Jimmy Rowles - several with my ex - Jimmy McPartland and Buddy Tate - Vic Dickinson and some of the great players like that. And then one with a singer Teddy King.

The one with Teddy Wilson, that was a gem. It was so nice of him to agree to do the two-piano thing and as a matter of fact, we did it at this guy's house who had two gold Steinways - face to face. That's where we made that date. For years in England, Teddy was one of my idols, and subsequently, he did my radio show. I'm happy that we did that before he died.

B.K: You've been able to branch out and do so many things, even ten years in one club.

M.P: I was in and out of the Carlyle Hotel for about ten years. It's a very posh hotel in New York where Bobby Short works. He left to go on the road and got me into the room. That started the whole ten-year thing. I would play there for two or three months, but that was during Piano Jazz. I mean, sometimes I would have to record something for Piano Jazz and then get in a cab and go to the Carlyle and play after hours. It's a pretty busy life.

B.K: How did you come to do radio, and what do you think about the fourteen years you've spent documenting the history of living jazz pianists?

M.P: The second part of the question I think is amazing. I mean, it's something I would never have dreamed of in my whole life. Before this show, they had one hosted by Alec Wilder, the composer. He had this book out, American Popular Song. All his guests were singers. He had Helen Merrill, Tony Bennett, and Margaret Whiting and people like that. The show folded, and they were looking for something to replace it. The people at the radio station called me, and said, We'd like to do a show on the order of the one with Alec except using musicians; what do you suggest? Two pianos seemed the most natural format and the least expensive. I knew scads of piano players. Mary Lou Williams was the first guest, and then we had Chick Corea, Bill Evans, Teddy Wilson, Hazel Scott, George Shearing, Bobby Short and on and on - John Lewis. I was like a kid in a candy store. Just call me up - next week we'll have so-and-so and all of a sudden the people sponsoring us who are the Exon company and NEA and various people liked the show, loved it. So we've been able to keep it going all these years.

B.K: Do you worry about the changes affecting the NEA, the politicizing of the arts?

M.P: Yeah, I do, but I just let other people handle that end of things and not worry about it. I plow ahead and think of more shows and ideas - what can we do to keep the thing viable - keep it interesting. I don't know if you've heard any of them up here?

B.K: In my travels travel across the U.S., it's there - in the car and wonderful to have as a guest passenger.

B.K: You're working on a book about women in jazz.

M.P: I don't know if that's ever going to get done, because two or three people have already done it. I am trying to write a book, but I think it's going to be more about my life in the music business and all these various women that I know will be in the book. But it just got to be too tough to do an actual compilation of all the women musicians although I probably know most of them and have had a good many of them on Piano Jazz. Gerry Allen, Renee Rosnes; a lot of these new kids coming up are fascinating. It's so much more easy for them now. Things have changed completely. Thank God!