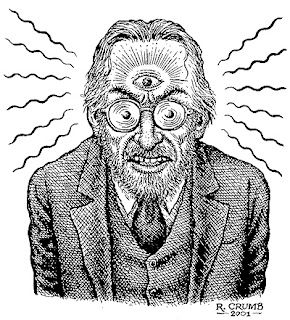 It must have been near June and I was having another one of those mind drifting days in third grade when I happen to notice a dry eyeball perched atop the eraser on my recently purchased  lead pencil.


I studied for considerable time before removing and placing dead center of my forehead.
No one said much other than the school caretaker who ordered me to stop three eyeballing him. I played along but didn't let him insult me and my  misplaced eye. I did a bit of smart mouth on him- besides this baby was made of genuine human cells not one of those rock hard playground marbles kids traded for a grim looking rabbit foot.


I strolled in for dinner and it became subject of a fierce debate. Pops asked me to remove during main course of which I responded: “Don’t worry, I can find if it plops in my spaghetti.” Most reassuring indeed.  He looked my way and tugged at his belt. I knew he was pissed but not enough  to get sinister on my ass.
Mama  tried to keep the peace and asked me put it in my boot till after dinner prayer. She kind of suspected I kept all contraband and bird feathers in there. That didn't rattle me – this was the fifties and I was goading for a fight.


Now, while all the descent is ripping us apart I notice I could see through the oak dinner table and read the bylines of Saturday’s newspaper underneath.
I kept my head down – “Judge Walters sentences Wayne Ketchum to three days hard spit for haulin’ pig shit across county lines and selling as hashish. “


Mama looks at me and says – “How many tons of shit?”  I look down through the fine grain – “Two point three enough to cover most the back yard so we can grow a field of turnips.” Pops says – “that’s my boy – he near genius!”
I climb the rickety stairs to my room and catch a preview in the mirror and notice the sucker was now on the tip of my nose. I try removing with pliers but it won’t budge.

Mama yells, ‘Pops, needs you down here – he lost his left shoe again.” So I slowly grab my wits and head to the living room and gets down on the floor. I’m looking and a looking but can’t see anything but dammit my sense of smell had never been so good.


I find his nasty foot cradle in the bird cage right where brother Delbert put it. It was full of seed, dung and feathers – looked like a refuge for mating crows.
Anyway, I hand shoe to pops who then thanks me – shakes the stuffing out then tells me how this extra eye will get me a college education tuition free. He says he has the money but he’d rather apply the savings to something more reliable – a sump pump. Then he wants to know why I’m wearing the extra eye dead center my nose – he feels it’s not so attractive - he preferred dead centre the head. If it stayed between my eyes I could cover it with a sportsman bass or trout patch.


I could continue this bullshit story but let’s go with this – April Fools.