I Have Walked a Mall in These Shoes 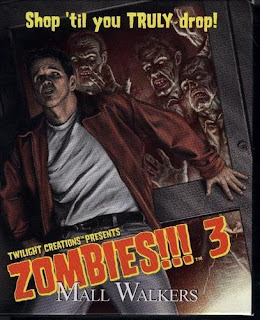 I’m not a mall walker – there are pros out there that put me to shame. I hate malls – I hate shopping. I only do it’s because it’s God’s and my wife’s will.


I left the house Sunday with one thing in mind - revisit these sweet cheap flannel print shirts that were racked over Christmas of which we kept buying for daily wear. I’m thinking – there were vibrant colors I missed out on.
I have the same problem no matter which mall I hike through – legs, mind and feet rebel. I don’t get it. Maybe, there is a training program for this. I saw women with bags of loot traipsing along with big grins – I’m wearing a friendly grimace. They speed marched on – me, foot drag, limp then collapse.


My deceased parents were professionals. Mall walking was sport for them. Mom did it to get away from dad’s deafening blasts of FOX News broadcasts. The man had a thing for screaming white men and pompous dimwitted news blonds. I’m sure Sarah Palin would have thrilled him if he had lived long enough to have experienced the call of the wild.
So the lady of our house traps me in one of those must have men’s shirts moments and I’m out of the roost hobbling about on a bus with a few dozen frozen stiffs.

We have two malls in our territory Dufferin Mall and Galleria. Now, Dufferin Mall has a Walmart and real stores while Galleria has shriveled pink hot dogs that look as if they were dipped in chilled bath water, cheap furniture made from recycled chipboard, once upon a time Zayre’s – cheap, cheap, cheap and the ever present throng of aging sports traders who push World Cup flags, miniature inflatable’s, photos of hockey legends, and of course the talking Maradona head.


I definitely prefer Dufferin Mall – it seems like the place where people who have adjusted to life shop.
Let me say Yorkdale Mall is impressive. My problem – I don’t have enough money to shop there. I was up there a few months back when I put a lonesome camera of mine which I thought was a collectible on Kiiji only to be told by a Chinese collector it was shit. I really didn’t mind that at all. He tooled through the camera like a forensic genius. I was so taken back I wanted him to inspect any future purchase from vegetables to shirts for me.


There is also the Trillionaire mall in Dubai that comes to mind. This place is so out there a pound of sugar costs three thousand dollars and folks are happy to pay because it has a gold seal on it – well maybe not – but who’s counting?


Back to Dufferin Mall. I made the trip for my new favourite shirts and Dammit!, wouldn’t you know – the place no longer exists. I mean I’m standing right where memory connects with reality and there’s nothing – just walls of blank grey. I even wore my last purchase - flashed the mall and quietly asked – Anyone seen a match?
My parents wouldn’t have cared. They bought coffee and the occasional bag of less than a dollar stuff.


I’ve seen photos of my dad in a mall – that was one happy dude! You’d see his buddies each with a foot in the beyond yet sporting happy day faces.
Brother Wayne was dad’s chosen victim. Wayne worked in a mall down in Indiana the same one the notorious King mall walkers adopted as a second address. So every day pops paid a visit. Now, if I needed a daily laugh, brother would serve up an arsenal of stories.


My wife and malls are compatible - me not so much. I shop in my head, rarely physically. I have numerous photo sites on my iPad all screaming product at me. Sometimes I bite but most times just drool.
Mall walking is a blood sport. You must be bred for this. I don’t really know the proper conditioning but I expect you don’t become a real pro until past eighty. I feel I have a lot to learn and as it stands - I’m pathetic, a novice a sniveling wretch. Maybe when the time comes and there’s a deal on walkers I’ll adapt!
Posted by Bill King at 1:21 PM