I Got Up This Friday Morning 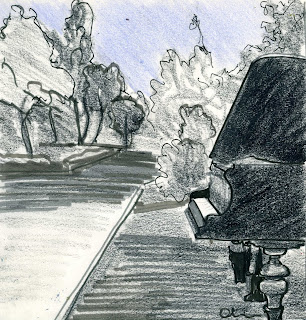 I’m an early riser but not like my friend Don Gibbons or Jan Cooksey who light up the bedroom at five in the morning as the iPhone starts signaling Ottawa and Indiana are on the rise.


Morning is Zen. It’s just me, a dozen or so fresh thoughts, the newspaper, a cup of tea and a loose plan for the day. If I had a day job that plan would be decided well beyond this domicile and I could be nailing carpet or training seals.
There’s something righteous about a head cleared of yesterdays junk and blank canvas waiting. That’s not to say there aren’t things scheduled or obligations to be met but it’s that morning illusion – the clarity and lightness.

I’ve already popped off a couple emails dealing with yesterday and bent over and picked the Star off the porch and caught a glancing look at the headline – its Rob Ford again and his lobbyist party. What would news be without a bit of Ford nonsense, or that snake at Orange - Mazza who used the province as his personal bank account without any governing Liberals taking this asshole to the shed and beating with a tire iron.


Friday – yes Friday! My favourite day of the week. This is exhale day! The transition between got to be somewhere to I’m not going anywhere because tomorrow is Saturday.
Friday afternoon is glorious mainly because Friday night is up ahead. Its fuck off time unless you’ve got a gig. A gig? If you have a gig on Friday these days it’s because you are playing your own music in a venue that’s not paying or working for another. You may be squeezing the door or claiming a few dollars from whoever you’re wanking behind. Gigs that pay come at weird intervals these days usually corporate. They could be Tuesday at 5:30 or Wednesday at noon.


Today I get time with my son Jesse as we head over to the Orbit Room and record some sounds on the magnificent Hammond B-3. I loves oooogan! The Orbit Room has the best nasty! This baby howls and screams like a pack of wolves standing over a plate of moose. Tim is always upgrading and toying with his joy cabinet and every organ player that touches this beauty makes it part of them.
Last night Gavin and I got it done. Three songs in the can – the piano tuned to my ears and now I’m starting to relax knowing eight songs are in play. And yes – Moon River .. what can I say. And yes Audrey was there - reached over and slapped Gavin upside the head and said – “You beast you – take it to the bridge and don’t stop until I’m back on set!”
Posted by Bill King at 5:13 AM