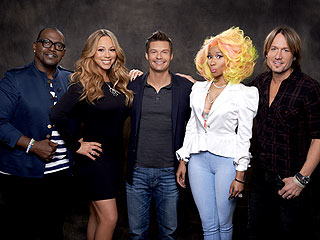 Some shows stay beyond invitation and drag on like road kill. American Idol needs an exit strategy.
I watched the sound off between the young women last night and found it painful - maybe one voice with potential among the cheery warblers.


I’m a hug fan of singers but not this kind of singing. I caught Brittany Howard of Alabama Shakes on Saturday Night Live Saturday past and she truly gave one of the best live vocal performances in years on a show usually fronted by unstable singing. The previous week Justin Beiber was heard raw absent auto tune and colorization - let me find the words – Big Stank!
Throughout American Idol’s history three singers have cut through with serious skills – Kelly Clarkson, Carrie Underwood and Jennifer Hudson. That’s not to say there weren’t a few other decent singers who found traction on Broadway and a few with mesmerizing vocal technique. Adam Lambert should have been my fourth choice but somewhere along the way he hitched himself to the bizarre and never returned.


Singing is still about the song and the person the message and big heart – the connection. American Idol is about the package.
Brittany Howard is in no way American Idol material. She looks wrong. When she opens her mouth the face contorts in a way that makes American Idol lip cooing dreaminess resolve into Mad Magazine cartoon. That wouldn’t be acceptable on AI. Cute is a must! Big curves a winner. Cute, big curves and doe-eyed humility – top twenty.


Don’t even get me started on the judges. I’ve always enjoyed Keith Urban but I’m sure he’d rather be somewhere writing songs and hanging with family. Nikki Minaj – what can one say – American Idol has dumped the entire history of the show down a drain pipe putting this clumsy speaking Muppet in a judge’s seat. Credibility Zero! Mariah is all about showcasing her body. She looks as if she’s perched on a throne and contestants court jesters.
American Idol is still about making every young aspiring bathroom yodeler believe they will be a world- wide singing phenomenon. Stretch limousine rides, a continuous flock of paparazzi in chase, long weekends in a Malibu beach house, worldwide adoration and a dozen handlers there to repeat two words – You’re Great!


The show will walk the same terrain as previous seasons -jack the masses and the results will be the same. By next season they will be looking for another set of judges and the cycle will repeat. Thousands of Mariah wannabees will line up around city blocks never understanding Carey was born with an unusual gift and is an absolute original.
More than anything the remote will now shy away another season and avoid collision. That’s a good thing!