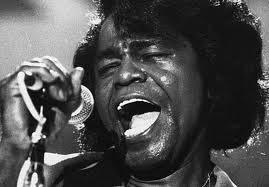 James Brown can take his rightful place alongside Coltrane, Miles, Ellington, the Beatles, Marvin Gaye, Ray Charles, Otis and the giants. The guy had a remarkable music and business mind - a one of a kind way of hearing.

I first caught Brown live back in 1964 with cape - three drummers and two bass players. I was playing a prom at the coliseum in Louisville, Kentucky in a side room while Brown inhabited center stage in the sports arena. What a spectacle - the place burned with female shrieks and thundering rhythm. I'd never heard a band play with such precision outside the Basie band.

That summer we followed Brown into Club Cherry in Lebanon, Kentucky with the Shadows - a cover band playing mostly rhythm and blues classics of the day. Club Cherry was this black music venue residing next to a long stretch of railroad tracks. The decor was all things dim and walls sticky with tobacco stains and evaporating body sweat. Upon entry, one of the first sightings was two large glass canisters - one with three or four left behind pickled pigs feet submerged in what appeared to be pond water and the other showcasing a preserved pig snout in proximnity of the cashier. Posters of Arthur Prysock, Count Basie, Lowell Fulsom, Cab Calloway graced the walls. Bands shared dressing quarters with the owner who on this occasion failed to sweep away a recently spent condom. Soiled clothing and the smell of fresh pomade challenged the nasal passages.

The stage where Brown worked his magic was not at all the dimensions you'd expect, leaving one to believe floor space down front served that purpose. On this night two fights broke out that were swift and memorable. One guy took a solid shot to the backside from a kitchen chair and kick to the head. Justice served. I remember thinking how unruly and bizarre the week must have been with Brown in attendance.

The local white clubs were jammed with beer swilling teenagers more intent on inviting a ruptured liver than a shot of music. Club Cherry was all about sex and music. In which order depended on how magnificent the hair doo shaped up and smooth delivery. Over at Club 69 the white boys were like vultures hovering over potential sex meat waiting until the last chick fell unconscious after drowning in a vat of near beer.

Fast-forward to the mid-nineties when Brown was booked into the Masonic Temple in Toronto. The late Toronto impresario Gino Empry was Brown's PR man for the occasion. My wife Kristine and I jumped all over the offer to attend the press conference with cameras in hand. The place was dominated by television crews so we decided to split up and shoot from opposing sides.

Brown eventually held court. I snapped a few shots when suddenly Brown singles me out, "Who says you can be taking pictures of me ...did I ask you?" At first, I was startled by the remark then ignored him. He then turns to Kristine and says ." Pretty thing you can shoot as many pictures as you want." Needless to say - I copped as many indiscreet shots as I could.

Nothing matched the concert images. The room was a suffocating hundred degrees and hundred per cent humidity. Both Kristine and I shot from down front but the cramped surroundings sent me into near panic for air. We relocated upstairs and caught some wonderful concert frames and enjoyed one of the best concerts ever. The foundation shook.

The ensuing years I have found myself buying early Brown sides reacquainting myself with the complex rhythm patterns - the inside horn lines that are at the core of his sound. Brown camped on the offbeat's a most unusual place to inject a clever twist of a phrase. We used to play many of the ‘Live at the Apollo’ tracks in the sixties in various bands but few musicians ever played the arrangements note for note.
Prince is the grandest disciple of Brown. He uses the same measured techniques building from the bottom up.

It's funny how we collectively say - we will truly miss the man - but in reality he'll never be gone. Like Ray Charles the music will linger an eternity. Brown was crazy as hell and did some wild ass things but it's still the music not the silliness that was his strong suit. That's how powerful his impact on all of us has been.

I met several players around Los Angles in the 60's and 70's who worked as sideman for Brown. This was no picnic. The gig was demanding and paid a paltry sum. Brown carved out minuscule stage real estate for each band member. If one strayed outside allotted territory one could expect a fine and tongue lashing - the same for wrong notes, miscues and stage wear. The man ruled a tight kingdom and kept his bands in prime shape. He was never less than perfection.