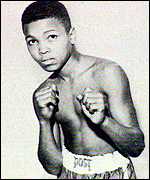 I was captivated by the Mike Tyson documentary a few evenings past. Boxing is a brutal blood sport with millions of game voyeurs, me included. I can point a finger directly back in time to my father who parked his boys and 6’6” frame front of the old Admiral black and white television Friday evenings for the Gillette Cavalcade of Sports – Friday night fights.

Brother Wayne and I didn’t really get much kick back time. There was always a catch to these all male social gatherings – antenna duty. Reception in the late fifties was a constant challenge. No cable or satellite dishes just a crooked pair of rabbit ears. It was all about direction. Keeping the ghosts at bay and pulling in a definable image. This was never easy especially when punches were being thrown in flurries. With baseball you had hours to locate a receptive position. The only drawback – standing around like an under employed mannequin.

Throughout the Tyson documentary I was overcome with sadness. Tyson’s under lit face said so much about the man. From the beginning mercy was never a word in Tyson’s limited vocabulary. He truly wanted to inflict as much pain on his opponents as allowed. The blows came with such force and from a place inside the man - a forbidden zone most men choose not visit but are willing to watch another conjure near the darkest regions of the soul. The crushing impact distorted opponents’ faces. Eyes would sink back in the head and skin fly about as if made from a soft synthetic substance. You never knew if a downed fighter would ever stand again let alone function as the toned individual who entered the ring. As much as Tyson’s fights mesmerized they also sickened.

My first connection with the fight game passed through another local favourite and a man near the top of the welterweight division from Louisville, Kentucky named Rudell Stitch. Stitch had been Kentucky State amateur champion in 1951, 52, 53, 55, and 56. He’d occasionally appear on Friday Night Fights forcing brother Wayne and I into our customary position near the rabbit ears. Oh, how we loathed this gig!

As the months passed and Stitch began to fill out the local sports pages my affection for the man grew. He was a decent person in a nasty sport.

I lived on the Indiana side of the Ohio River. No matter which side you approached the running body of water was treacherous. Dad had a low rent cabin cruiser docked on the Indiana shoreline. It leaked pools of water. Any excursion up or down the Ohio meant brother Wayne and I earned coffee can detail – dipping and scooping water then tossing overboard. Occasionally, we’d get to steer the craft on the return sprint home.

The falls is a tourist draw. We’d bike down as kids and walk amongst the reeds and catch the scent of rotting fish decomposing under a blistering sun. This was the place fisherman inhabit. Below the falls there were connecting boulders where serious fisherman wore hip waders allowing them greater access to the prized fish flopping down from above. These small enclaves formed pools imprisoning some of the fattest game.

Near the falls the fishermen were mostly African American. The place was a source of food and good company.

On a late June afternoon in 1960 Stitch was fishing near the falls in his customary hip waders and heard the screams of a distraught voice - a fisherman had fallen into the swirling rapids. Stitch quickly dropped his gear and dove in rescuing the man then struggled to get a grip on the slippery rocks. The weight of the water logged hip waders - filled to the rim - carried him deep below the surface. Stitch drowned that night and so did the hopes for a boxing king from the area. He would go on to be awarded a Carnegie hero.

We usually gauged our commitment to sports heroes through the influential men around us. Dad loved the Boston Celtics with Bob Cousy – Boston Red Sox with Ted Williams –the Yankees with Mickey Mantle. Uncle Bob in Pennsylvania worshiped the Pirates and Steelers - and most everyone around us the Cincinnati Reds. Basketball and baseball are still big local items. Boxing was on the periphery yet it was still a right-of-passage in tenth grade gym class.

I for one wasn’t prepared for this. I could run indefinitely until someone took a plank to my head but protecting it from a well placed fist was a different matter. We’d lace on these oversized boxing gloves and dual it out as part of our grade. I remember getting hit more than plunking my opponent straight on. Plus, I had this tender spot inside that would never allow me embrace a gun or physically bring harm to another. It has got to be genetic. Too many boys around me seemed to delight in bringing the hurt.

By early 1960, a new face was rising in the local sports arena – a young man named Cassius Clay. He’d just won the heavyweight title in Rome and had returned home.

Clay was loud, proud and boisterous.

I was playing organ in a local rhythm and blues band when we got an invite to play at the R.J. Reynolds mansion for a party celebrating the birthday of a young son. The kid must have been around fifteen and out of his skull. We played on the ornate wood veranda and every once in a while I’d catch a glimpse of the drunken teenagers rescue another from drowning in the family pool.

While we’re on break I saw this young black man carrying hedge clippers come nearby. He’d trim a bit and peek around to witness the festivities. The closer he got his distinct shape, form and features were unveiled. Under the soft porch light a familiar face began to shine through. It was Cassius Clay! I wanted to jump the railing and hug the big guy and wish him well and beg him drop in my gym class and beat the snot out of a few choice individuals.

Clay was financed and practically owned by a consortium of high end investors. These were some of the most prominent men in the state of Kentucky.

The civil rights movement was just beginning to challenge the local white temperament. Louisville was a progressive city with a great affinity and respect for the arts. There were sit-ins and banners demanding an end to segregation. Dr. Martin Luther King spoke at a huge rally in Lexington and the serious inspirational tone of his message spread throughout the state. There were restaurants around the city that were still for blacks and whites only.

Clay would find this an affront to his growing popularity and core beliefs. He’d just beat the best athletes in the world and had brought the pride of that victory home for all.

The party ended when Clay was asked to leave a local eatery that refused to serve him. The disgraceful action sent him into battle. We were told he took his Olympic medal center of the bridge connecting Louisville and my home town Jeffersonville and tossed in the rampaging Ohio waters. I remember weeks later riding my bike to the spot where I believed it submerged and stared as if I could spot a reflection of the prized medallion from the river’s bottom floor.

I like so many other young people were beginning to get a feel for American justice, inequities, and the rotting effect of systemic racism.

As Clay began to work his way up the professional ranks beating every opponent along the way with clever footwork and quick hands whites began pleading for his demise. The greater the hatred the more in the face Clay stuck it to them. The poetry – round predictions – the speed at which he delivered blows frustrated his distractors.

Dad, despised and loathe him! He’d recite the garbled poetry and predict the next fight would shut him up. Early on, the fights came fast and ended just as quick. Dad would sit hunched over the radio and give a play by play - round by round narration. “Clay is getting his butt whupped.” Twenty minutes later the fight would be over and the room would still. The big guy now humbled would take the short walk to his bedroom - defeated once again. The silence was more than golden - most welcomed!.

Brother Wayne and I used to pass by Bales Motors car lot on the way to school -the best place to beg for a complete detailed model car. Every once in a while they’d give us a not-so-cool plastic Plymouth. On one occasion we noticed a pink Cadillac in the driveway. We quickly sprinted to the showroom window and noticed a large black man inside and finely dressed man behind the wheel of the Caddy. Wayne starts freaking – “It’s Cassius Clay – it’s him!” That was our cue to pester the champ.

We were both skinny chumps who did more running from fights than holding ground. We cracked the main door and start taunting Clay. “ I can whip you – come on over here.” For a brief period everyone ignored us. So I kept it up , “ Hey Cassius, I can kick your butt – you ain’t fought nobody until you fight us.” Those may not be the exact words but they sure come close. Bam! Clay turns around and runs towards the door and we scatter like a couple of parking lot cockroaches.

“Come back here and say that again,” says Clay. Wayne and I come out of our hiding place shivering as if the man were going to TKO us before we got home. We drift back to the door and slip it open. “ I can whip your butt – everyone knows I can.” Bam! Clay comes at us with wallet in hand. “ I have ten dollars that says you boys won’t step in this room.” He was right. We scattered across the road and found a clear observation locale and watched until the family clock ran out on us - time to go or meet dad in the next three-rounder.

Muhammad Ali was my hero for years to come – he stood against the powers that be and refused induction into the military on religious grounds. He spoke against the Vietnam War. He fought with smarts, class and dignity and celebrated the right causes.

I was thinking about the match-up between Tyson and Ali and know Ali would have beaten Tyson soundly. I’m sure he would have endured some devastating shots but he survived that kind of punishment with the hardest hitter in the ranks – George Foreman and defeated him with intelligence and a brilliant strategy.

I’ve watched those fight films numerous times - Joe Fraizer, Ken Norton, George Foreman - it’s as if I can see the man dodging and slipping punches most would freely collect. Fraizer hurt him and hurt him badly, but somehow Ali recovered and overcame. That big smile – kids all around and a world followed close behind – the planet loved him. Guys like Ali come once in a lifetime. I’m sure glad it happened during mine!
Posted by Bill King at 10:58 AM