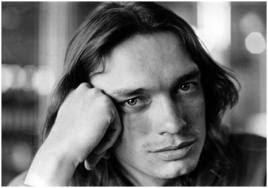 There are those in life who will never be forgotten. Whose brief existence offers so much promise, but whose life circumstances fix the odds against achieving continuance. A flame caught in an unforgiving draft, cast into eternal darkness. Such is the journey of bassist/arranger/composer Jaco Pastorius.

Pollock, Parker, and Pastorius walked much the same ground. Drive, genius, debilitating depression and uncompromising intellect. Each man understood just how magnificent they were and never hesitated to remind friends and acquaintances of that fact. Each man knew the art they were reinventing could undergo change, recover, and successfully bear new rewards.

Young Pastorius was all bravo. He swaggered, jeered, and stuck it in your face like the punk down the street who kept quick-stepping around you on the way to the hoop. Did I say hoop? Jaco was a court rat who spent as many hours playing one on one as laboring through a set of chord changes. This was life served at full throttle.

It was "Donna Lee" from Pastorius’s Epic Records debut that notified the music community of his arrival. Here was an unknown player doing things on electric bass never before conceived possible. Fleeting lines, harmonics, supremely crafted solos; lead, rhythm, everything on an instrument which had been traditionally assigned a supporting role underneath woodwinds, brass, percussion and most other equivalent strings.

I can’t recall the number of times I dropped the needle on the track for unsuspecting musicians, especially bass players. "Who the hell was that," was the usual response. "That sounded like a Parker tune? Are you sure that was an electric bass?"

It was a matter of days before I recognize some of the meatier originals on the recording. Then I discover a theme Jaco had been developing since he was eighteen. The unconventional use of harmonics as part of the composition was revolutionary. The phrasing, mood, tone, and close-textured symmetry made the piece his unspoken elegy.

Everything Jaco assimilated from playing in R&B and jazz bands in south Florida served him well the coming years. During a ten month road stint with white soul singer Wayne Cochran and the C.C. Riders he learned to read and write music through Cochran’s music director Charlie Brent. The strict rules imposed by soul singer Cochran, who’s 14 piece band was a virtual touring classroom, were ignored in order to accommodate the quirky player. Never one to adhere to Cochran’s dress code, which required tuxedo wear, Pastorius performed in street clothes off stage hidden behind a scrim.

Not long after leaving Cochran, Pastorius replaced Alphonso Johnson in Weather Report while the band was half way through recording Black Market. Evidently, Zawinul saw himself in Pastorius and gave the young player extreme latitude in matters of music and stage attire.

Now comes Heavy Weather. If ever there was a recording from the seventies that deserves the epigraph "For All Eternity," this would be it. Weather Report had been progressing towards this sound since "I Sing the Body Electric, Black Market, and Mysterious Traveler."

How many times and incarnations have you heard the epic Zawinul composition "Birdland?" Here’s a track in which every part can be isolated and committed to memory. It’s just that rich. Each individual pattern runs parallel, intersects, and unites at just the right moments. No cover band can successfully render the tune publicly without precisely duplicating each line of counterpart and interconnecting melodies. We were ecstatic knowing a track as good as this came from an idiom so under appreciated could achieve such universal acceptance. It made you consider maybe jazz fans and musicians didn’t emanate from the far side of Neptune after all.

One glorious night in the mid-seventies I attended a double bill featuring Chick Corea’s "Rerturn To Forever" and Weather Report at Massey Hall, the celebrated institution that gave us the "Greatest Concert Ever," with Parker , Gillespie, Roach, Powell and Mingus. The building bled an intoxicating mix of dust, mold, sweat, tobacco and hashish. A floating blue-lit cloud hovered below the rafters leading to the main stage giving the evening a ghostly surreal atmosphere.

Corea and band played an exotic blend of classical, Latin and rock injected pieces with conviction. Throughout the performance it was Corea’s stunning pitch-wheel bends and cascading lines arising from the Moog synthesizer and complex unison figures with guitarist Al DiMeola that steered the set to a gratifying climax.

You could sense the anticipation as the stage was being adjusted to accommodate Weather Report . I heard voices whisper "Jaco, Jaco, Jaco, which one’s Jaco," from behind and across the aisle. "I wonder if they’ll play "Birdland" first?"

As the lights dim, Wayne Shorter and Joe Zawinul amble to their respective places like seasoned jazz musicians unaccustomed to the visual theatrics of rock arenas. The last to find himself in position was Pastorius who quickly acknowledged the approving shouts and whistles greeting his arrival by hoisting the bass upward then back for a final volume adjustment.

Unlike Return To Forever which hit with all the force of a category five hurricane, Zawinul and company built their set to a final resolution. Throughout Pastorius glided from one side of the stage to the other displaying a physical presence absent the other front line players. He was all head, hands and heart.

From "Teen Town" to "Birdland" the band played a smoldering brew of fusion inspired instrumentals exactly like their recordings leaving the crowd clamoring for more. At no time did Pastorius display the antics we were led to believe accompanied each performance.

As the years pass rumors of Jaco’s manic episodes began to consume any distant news of further revolutionary advancements to the art form. There were those who believed he had said all he had to say and his departure from Weather Report was further evidence of that.

He assembled Word of Mouth and recorded a brilliant album, "Invitation" quickly establishing himself an arranger and composer of the rarest abilities but there were cracks in the pavement ahead that would eventually derail the juggernaut.

For most fans, the details behind the sporadic solo efforts; the alcohol, drugs and growing depression were no more than private conversations between Jaco and those close to him and corporate types still trying figure out how to cope with a legion of "bad boy" rock messiahs.

When news eventually filtered out concerning Jaco’s declining stature and health he was by then a street urchin; homeless, rejected, addicted and a manic depressive. For many, it was hard to believe anyone with such gifts could so easily fall from grace and descend to such depths. Where was the musician’s union? Where were the public health services? How could this be allowed?

The most disturbing aspect of his decline was the violent ending that awaited. Jaco, was no stranger to confrontation. It was a martial arts blow that quickly shut him down. Within a few days he was removed from life support. Movies often afford a period of redemption; time to reflect, rehab and reassert. For Pastorius the end came quick without compensation or compassion.

When you replay the volume of music Pastorius recorded during his brief tumultuous career you hear none of the pain, conflict or consequence that followed him, instead a joyous reverence for new possibilities, innovation, experiences, and existence, few will encounter in a lifetime. Jaco, we’ll never forget you!
Posted by Bill King at 12:05 PM