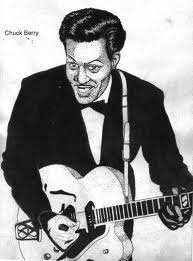 I’d been hanging around the musicians local in Hollywood in 1968 looking for a gig or gigs when this guy named “Scooby,” if you can believe that, mentions Chuck Berry was in need of players for a concert at the L.A. Exhibition center.

“Scooby” was this older than most hippies guy who couldn’t get a handle on the love generation but liked the perks. He played saxophone and did a few pit gigs the most memorable being hired to play behind the Temptations. In fact, he was the only horn facing a fully orchestrated score calling for eight to ten horns. He professed it to be the scariest night of his life. “Just play the parts mofuck…” He’d been awarded this non job with the union to bring the rock guys back to camp union. Many could care less about being members.

Anyway, I wandered in hoping to find any kind of work – shoot pool–chat it up with the employed studio musicians who hung around between session calls and pretended to be in the middle of things. Scooby intervened announcing – Chuck Berry was in need of a band and Scoob was hiring.

I quickly got on the vine and called the players I’d been rehearsing with who were to be the foundation of Linda Ronstadt’s new band, me being the music director - that in itself another story. In short – Linda went to the beach a lot and I looked on like a mute smitten with Cinderella. Man was she a beauty!

I get the band to commit and show up ready to roar for Chucky. First band up, the original edition of Fleetwood Mac with Peter Green, second – the Chambers Brothers. Forty minutes into the Chambers Brothers set I was ready to rip the throbbing cowbell out of the front man’s hand and scream “Time” ….is Up!” It may have been a cool song for a minute or three but a heavy dose of "Time" was more than this vagrant piano man could withstand.

Here comes Chuck! Give it up.

Now, you must keep in mind Chuck didn’t rehearse or spring a set list on you. So I stood back and watched the roadies haul his psychedelic stained Fender Dual Showman on stage in front of ten thousand screaming reefer-sucking teenagers.

Soon, an old upright piano is rolled in placed. I looked on and thought, “That must be for me. I asked myself if one could actually hear this thing beyond your mother’s living room. I scanned the crowd for sweet faces, something as gorgeous as Ronstadt.

Chuck shows side stage wearing this magnetic looking blue Nehru shirt. Now, I’d owned a dozen custom made Nehru’s with clean ribbon design – cut nicely for me from the Mercury Gift Shop in the East Village in lower Manhattan. Chuck had one that could have only come from the B.F. Goodyear Thrift Shop next door to Uncle Phil’s Process Parlor. Berry could have lit the heavens on this occasion with that shirt.

Just as we were about to climb into position pianist Barry Goldberg and drummer Eddie Hoh emerge. Goldberg cuts me off and announces he’s replacing me on orders from Chuck. This catches me off guard. I think for a minute then tell Goldberg to bring Chuck over and we’d work things out. Goldberg fires back, “Look man, Eddie and I played with Chuck last night in Chicago and flew all the way out here to play with him.” Another pause then I ask, “ How much is he paying you?” Goldberg shoots back, “ We’re here because we want to be and Chuck wants us.” I respond, “We’re here because we’ve been hired, get lost.” Case closed!

Goldberg sniffs around Chuck trying to draw him into the line of fire. Chuck looks back and says, “I don’t care who’s on the stage just long as they play the shit right.”

Goldberg loses it starts telling me how he’d make sure I’d be forever out of work in L.A. Hell, I didn’t even know anyone who had a job. Who could he tell, the folks at the Spot Dog Diner, the home of the ten-cent corndog - my favorite hangout? Eventually, Goldberg backs off and fades away.

Chuck kicks things off louder than a rampaging diesel. Berry’s amp was so distorted it was difficult separating chords through what must have been a busted speaker cone.

The next fifty minutes we hit nirvana. Every song had a piano solo and an approving nod from above. I can’t express how elated I was. The crowd stomped, hooted, rocked and rolled. Berry finished the dynamic set with “My Ding-A-Ling.”

I left the stage feeling like I’d conquered the west coast - from here, second keyboard with the Doors?

As we patiently wait to get paid a hundred crisp greenbacks I thought maybe conversation with Chuck would be appropriate. Three words in. No response.

Now came our pay check. Chuck, without looking up lays four hundred dollar bills aside and begins scooping his personal stash. Like a fool I think the time is ripe to get acquainted so I say, “ So, I guess you’re taking the band out for steaks.” Berry gives me a look I’ll never forget to this day. Let me put it in words. “ Get lost loser before I torch your head - shrink wrap it in my vinyl Nehru shirt - and feed to starving pit bulls. Excuse me, I have a plane to catch.”

Suddenly, a gig panhandling seemed more realistic.
Posted by Bill King at 10:11 AM