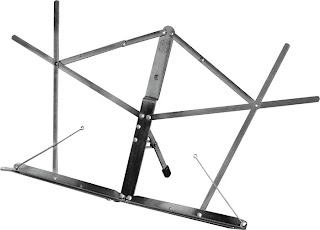 I was just looking at photographer Richard Conde’s photo of Natalie Cole at Newport 2013 and saw big lettering dripping from the music stand and thought about the number of times I’m on the bandstand and the singer has big scripted lyrics; bold-typed book - wide open.


When I photographed Tony Bennett a few years back at Montreal Jazz the stage was like an airport runway – nothing – empty – band set way back. Tony strolls end to end eyes glistening in the bright lights singing to perfection. Wow!
I know Barbara Streisand hid from stage 27 years fearing word block until giant teleprompters solved anxiety.

I get it – I can’t remember lyrics then again I’ve never considered myself a singer just a guy howling at the moon.


Phil Collins used to paper the stage end to end – Cher had teleprompters sporting lyrics large enough that could be witnessed from space.
Molly Johnson never goes without the “book of faith and moral support” - neither do most of the current crop of jazz singers I know.


For me the hands down best was Sophie Berkal-Sarbit. Sophie never forgot a word a song or ever in need of propping up. I’d say how about this song we did three years ago and she’d look back in deadpan expression “OK.”
I’m thinking OK what – you’re going to pause and search iPhone? No – just start playing.

I’d sit and think, Bill boy you can’t even remember a repeat line from a common blues and this young starlet stores volumes in her head.

I truly think memorizing lyrics is about clearing the head and concentrating. As I said, I find this to much for me – yet it’s never a stress issue. Some people have big memory and can look at a full page and retain. I look at a page and I see the binder clamps.

Lately, I’ve gotten really pissed at myself for relying on music and just listen and play along, over and over and find I retain so much easier.
Another practice is reading the lyrics by themselves and really getting a true understanding of what’s being expressed. Next, go slowly with words and notes to hear the match-up.
When I was fifteen I memorized Beethoven’s Sonata in Bb major – some twenty-eight pages – Clair De Lune and a Bach chorale for recital at the Louisville Academy of Music. I had six months preparation. I must say I’ve never been more terrified. About three pages into sonata all I could think about was screwing up. It never happened - my hands got angry with this brain and kept signaling – shut the fuck up.
From a photographer’s viewfinder music stands obscure singers and is so unprofessional. You don’t look like a singer – more like someone uncomfortable delivering a speech.
I have small lyric books programmed in order for performance. I rarely sing these days especially with profound talent like Gavin Hope, Stacey Kay and Selena Evangeline in the neighborhood, so those crutch tools are gathering basement lint.
Highly paid pop artists have giant word screens and voice tracks. You can’t compete with that. It’s all about the visuals.
Really bad bands can memorize and hop around like wounded turkeys and give a passable performance. Really super ones can sit with pages of notes and sing their bottoms off and leave the audience in a state of indifference. I wonder how much this affects the over-all quality and audience interest. Does that note book and music stand say to these folks you aren’t serious?