You Were So Nice Today! 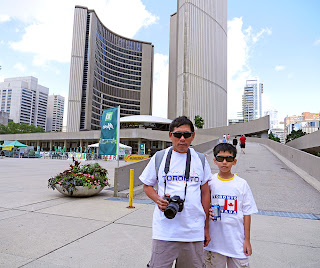 I jumped on the bike at eleven this morning – the plan – test the new Panasonic GH3 for video and stills.


I thought; Kensington Market, City Hall and Dundas Square - anything beyond a bonus.
Kensington Market was humming at 11:15 – always rich with humanity and vitality. I set the tripod on a corner and just toyed with settings all the while aware there was much good life going on with folks in a genuine good mood.


Caribbean Carnival is always an exhausting triumph one built on enthusiasm and endurance. The market was well received with American and island tourist – at least the ones who climbed in bed at a reasonable hour.
Americans have a distinctive tone and look that shines confident this side of the border. Black Americans have a sense of popular culture fashion more akin to BET and Beyonce than island jump up yet most appealing.


After catching a few images it was off to city hall.
City Hall was in set-up mode for Irie Festival. A strange event to mount with forty six years of Caribana hovering over the shoulder and from the look and feel the festival should move to a more suitable time of year. Big events like Caribbean Carnival are proven affairs that bring multi-millions to the city and attract a cult following. There’s no  way you can piggy back on the God Father and Mother and not come out with a broken nose.


I’m lining tripod and camera facing bronze sculptures when a greying man about my age wearing protective head gear inquires if I’m professional or tourist.
I fill in a few blanks and continue on.


The gentleman parks his bike by my coveted stone table and takes up residency. I sit down and strike up conversation. I love chatter – to me it’s a like a great jazz solo absent chord changes and harmony.
For some reason the guy wanted to talk about socialism and art. This is when I listen.


I hear him out – Stalin and Castro. Small C capitalist Big S socialist. I hear him sermonize all the ills of the world ending with saying he’s a feminist. OK. You got me with that. Then he says “ I have a problem with women adorn in skimpy clothing and those who cover head to toe.” I don’t! Time to move on! Friendly, but more than I’m willing to debate or contemplate.
Next up. Two island women ask me when is the Jamaican flag to be raised and what time prayer service. I have no idea but entertain. Then they ask why I have a camera.


I tell them I’m just out rehearsing when one says,” I thought you’d know all this stuff being out here and all.” She asks me, ‘where do you think I’m from – I say Curacao – end of conversation. They move on and I laugh.
A moment later a man and son approach with big camera in hand and ask I take their picture with water pool and old city hall background. I do. He then says he’s from Vietnam and asks have I ever been. I tell him I had the opportunity during time of war and declined. I then proceed to set up his Canon 60D to make it near impossible to screw up a picture.


We cross paths again and I ask to photograph him and son for my own collection. We shake hands, then shake hands again – then shake hands again. He then asks for a card and invites me come to Saigon and stay with his family. I have a real sensitive place for Vietnamese and the horror of war and am always astounded they carry no grudges for all the cruelty that was inflicted on them. This is when I believe there is a God!
On to Dundas Square.


I really like the hang at Dundas Square. The water pipes and children playing is an attraction by itself but today it was some sort of goofy promo event where the big win most times was a five dollar gift certificate to Pizza Pizza. Talk about a scene killer!
Next up the Rex Hotel. I knew my pal Glen Anderson and Excelsior Jazz Band play 12-3PM trad jazz. This always comes with a built in audience. The Rex can be fun for video and camera. People just went about their lives oblivious to my invasion. I truly enjoy. For me it’s camera power. I’m a crazed freak always challenging the learning curve. Don’t keep me in the dark or I’ll show up with flood lights!


So, I guess what I’m getting at with this long winded essay – I love people and on a day such as this – perfection – people were downright hospitable and big fun!
Kris always says – you’re Italian grandmother inhabits you – and she’s right. Good living – is surprise conversation, the unexpected and the electricity of life. Get out – get talking – get with it, get funning!
Posted by Bill King at 3:47 PM