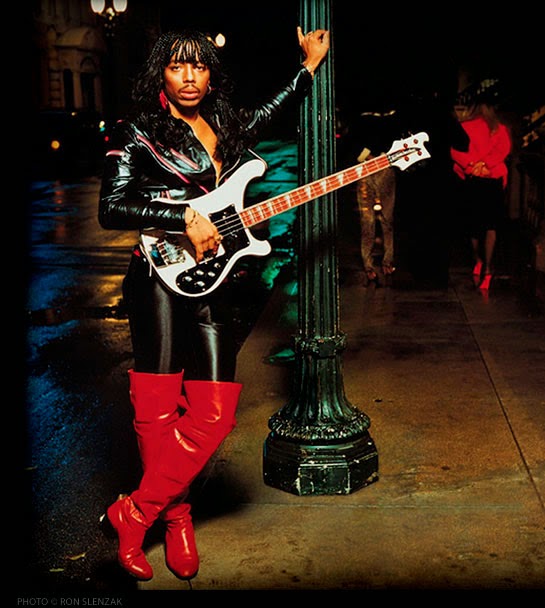 Every once in awhile I reflect back to the basketball games at the University of Toronto Settlement House and a tense locker room where expatriate Americans mixed with diehard Canadians and games that never seemed much more than a run and shoot affair. I can’t say I found them much fun yet they provided a good physical workout and a chance to socialize in a superficial zone.

Locally, basketball was still considered a distant cousin to badmitten and lacrosse, nowhere as glamorous or necessary as hockey or even rugby.

What did make those games spark was the arrival of Rick James.

Few players knew him as a musician and none would suspect the years ahead would spin him into a planetary funk machine and a “player,” a major celebrity who escaped the humourless runs.

I met Ricky early 1971. He was dating a stunning young secretary, the very sight of would make one think of those European beauties that graced Fellini art films. She adored him, but at times, I could tell all was not well in the relationship. It would be decades later she would admit that he would intimidate and then severley beat her.


James was old-style American music pimp. He had the charisma thing down pat; the quick seductive lines and overwhelming personality. He could disarm the indecisive and win over the reluctant. He was a pro with a keen understanding of what motivated people, what turned them on; their strengths and weakness. This came from observation, the hard lessons from the street and a killer’s instincts.

James was always assembling a band. He had pieces of songs in mind but only a basic grasp of guitar. He would strum a few simple chords and recite a few words and melodies, then enlist players in his sphere, who would help complete.

We played a few shows together and explored the possibility of combining forces. Although we were both Americans resettling in Canada we were still a great distance apart on procedure. Sports and laughs were easy to come by; a clear music direction, out of reach.

In performance, James had already absorbed the measured instincts and stage confidence of American entertainment. He knew how to motivate an audience and quickly get their attention. He also understood that once you have them, you never let go.

We did a gig at the old Bathurst Street Church now the Randolph Theatre – a fundraiser to save Gothic Avenue from the wrecking ball. A set list of originals was in place and a couple cover songs James was fond of. Part of his duties was playing conga drums. Moments into the set, the percussion instrument sat vacant a pair of hands; James was out front taunting and appeasing the audience. He played the mostly brown rice crowd like they were seniors at a Vegas show lounge. I wasn’t amused, yet he was now in control. Half way into the set James jumps off the stage and starts a victory lap through the aisles. “How you all feel? Are you with me? Let me hear you say yeah.”

O.K, O.K. I get it. Us hippie musicians were in need of focus and just playing silly protest songs and that wasn’t going to cut it. James 1 – band and I, 0.

Ricky would drop by our house dressed like he’d bought all available Arizona turquoise. It seemed every few days some guy would turn up in the neighborhood and pop open a display cased crammed with silver and turquoise bracelets and neckties-- big gaudy chains and trinkets, and someone would shell out a pot full of dollars. James was a walking turquoise display manikin.

James was also fascinated with the number of hippie-like women on our block. Gothic Avenue was a winding street that attracted hundreds of young people who were able to temporarily settle in houses destined for the wrecking ball. The homes had been purchased by Greenwin/Cadillac for the sole purpose of clearing and building high rises.

Ricky had been hanging around sharing his charisma with women much less receptive than the club crawlers who lit up when he strolled past and showered them with attention.

James walks back to my side of the road and protests. “Bitch! Never ask a man wash your back unless you want the full treatment.” I had to think about that for awhile.

James and I would meet up and shoot hoops usually at the end of the street. The first few months I’d dominate him underneath. Then he got his legs back and would come at me full force – even assert a bit of defense.

The second go round at the Settlement House saw a more confident James sprint up and down the court and score at will; Buffalo, New York style.

He would arrive in locker room draped in a white fur coat, gobs of turquoise jewelry and fly pimp hat. If you didn’t know him you’d think a drag queen was lose in the compound.  He’d change into a pair of red shorts and T-shirt, leave the costume tucked away in a locker, then mix with the common men upstairs. If he weren’t the only black man on the court you would have never noticed him.

By now, James was getting more assertive on court. The both of us come from American playgrounds where taunting and laughter are part of the game--a fusion of cool and skill; mandatory. The boys upstairs didn’t read it that way. The humorless bunch read James constant chatter as an invitation to fight. He’d just laugh them off. This was something you couldn’t explain. It’s believed, sports in practice is a psychological battle where boys overcome adversity and become men. It’s physical and sometimes heartless. Only in victory is there relief and gratification. Fulfillment comes as one matures. Fraternities are by invitation only.

City TV was in its early stages with an assortment of civic forums with open mike nights. Free for It All was one such rowdy study. We went with a contingent of hard-line brown ricers from Gothic Avenue to protest the destruction of our neighborhood. No doubt, many were watching. Local jazz aficionado Larry Green scored a one hour weekly music show at City -- Music Friends and offered me a segment. I brought along guitarist Danny Marks, bassist Chris Vickery, Bill Usher, percussion, Ian Gunther, violin. At the last moment, I invited Ricky.

We got together in advance and Rick learned a couple of my originals – “Grim Reaper” and whatever the other was called. I had a view of the song far different that James but was wise enough to let him roll with it. Rick went all Jim Morrison. In fact, he came dressed as Zoro and milked the song a good fifteen minutes. I could see where he was coming from. I was pretty shy and more at ease speaking of social problems while James wanted to go theatrical and milk every phrase. It was terrific.

When I returned to Canada in late ’79 -’80 I dialed City TV looking for a copy of that show. An assistant searched and confessed – they had so little funds back then they would record over tapes, reuse or just erase. Damn!
James finally got a band together ‘White Cane,’ funded by lawyer Stan Weisman, one of our fellow basketball partners. Stan was smart and got everything contractually down on paper. He put up $10,000.
The band went into the studio and cut some sides and played a few gigs around Toronto. Stan was always hustling in James behalf. He was an astute businessman with a keen ear for talent.

Somewhere along the line James and Danny Marks had a falling out and James punched holes in the speakers of Mark’s prized Fender Twin Reverb. James knew revenge and would serve it at all hours.
I was religious about basketball. It was my reprieve from the daily stress of being a musician and resolving my issue with the American military and Vietnam. James had spent time in service and it was never clear where things went from there. He initially came to Canada, AWOL from the Navy and formed the Mynah Birds and stayed close to his Yorkville digs. How he solved the military thing, remains a mystery.

Ricky and I would occasionally meet and share a few stories and laughs. Things were cooking for him and Hollywood only months away.

I showed up late for basketball and walk into a nasty situation. A fellow player walked passed me holding a blood-soaked towel to his mouth. There was an eerie silence on the court. Then the guy turned and screamed a James, “You’re done motherfucker, you’re done-- start running.”
I had no idea what had just occurred until mouths starting moving again. It seems Ricky and said player had been jostling up and down the court and Ricky got in his face and the guy said something that lit his fuse. James smashed him in the mouth and broke a few teeth.

There’s two kinds of court sense; one, understanding the game -- the second; understanding your opponent. If you can’t physically handle a guy then it’s best to let things go and just out play him. In this case, the mouth was way to busy.

Not long after the encounter James disappeared from sight.

I was walking along a Toronto side street when this guy walks up and says, “Hey King, you know who I am?” I respond, “Not Really!” He then goes on to tell me he’s a cop and there’s warrant out for my pal James and when he’s done with him --James will be in jail. He also tabulated the costs to fixing his teeth and damage to mouth.

James was long gone and living in U.S. I doubt if he ever returned to Canada. To this day even after his death, I bet that warrant still remains in place.

We were living in Atlanta in ’78 -’79 and James was coming through town. Atlanta was a break-out market and James had just struck gold with ‘You And I.”

I got a hold of his booking agent and they got word to Ricky. Kris, Jesse and I were invited down and situated on the front row.

Through the concert I could see where this was going. He was holding an electric bass moving about like he was actually playing. He wore the dread wig and was in total entertainment mode. This was old Ricky with complete songs.

After the gig, we were invited back to his dressing room. Just like the old days he was over the top outrageous and still had the knack of making you feel like the only person on the planet of importance to him. He saw our son Jesse, who at that time was seven years old and proclaimed, “Boy, I’m your Godfather Rick James. Is there anything you want, anything?” Jesse looks at him and says, “Bicycle!” James, looks down at Jesse and responds, “You’ve got it.”

That was the last time I saw Ricky. The years pass and he soars. He was running with the "Bigs" and setting trends, yet all was not well.

Drugs, kidnapping and torture charges would follow and a reckless regard for his body would destroy him.  There was little love for a guy who had it all and just pissed it away. Comedian Dave Chappelle cartooned him. Those things stick an eternity.

Stan? Good Ricky called Stan one day before his downfall and flew him down to Los Angeles introduced him to Magic Johnson and the Lakers and repaid the $10,000. Bad Ricky? I can only imagine who he’s charming now!