Motown, Smokey and the Cosmic Splash. 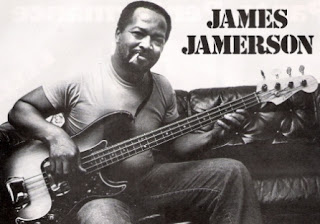 We began rehearsing for a flat out raucous night at the Roxy club 1977 in L.A. with the Pointer Sisters in Motown great James Jamerson’s garage. Jamerson was big history, killer funny and a delightful host!


I grew up with Motown – the Supremes, Temptations, the Miracles, Marvin Gaye, Stevie Wonder; so to say I was near entering the zone of mystics would be putting lightly. I just wanted to hear the stories, feel that pulse and look for a welcomed place to fit in.
The rehearsal went well other than Watson was way late and when he arrived the girls placed show music in front of him which he just waved off. He was an effects player not the guy to navigate an Ellington Medley.


The night of gig - one of the great  life conversations occurred just moments before downbeat at the Roxy when Jamerson shifted his stool and spoke: “ Look here Bill, I play back of the beat, Gatson in front – all the territory in between belongs to you.”
I thought about those instructions until the first beat drop and we were deep in a groove and realize, the space between beats was an enormous crater.

I started whacking a way on clavinet with Wah Wah pedal in full force and trying to locate the middle. It took a few bars – never played this laid back or controlled. It was all about the groove played by Motown rules. This was how the greats make music. The big up! And now for the big down!


Six months later I find myself in the basement of Marvin Gaye’s sister’s home in South Central L.A auditioning for a gig with a hundred other players for a soul concert at the Wilshire Abel Theater – the headliner Frankie Gaye. Now, you can’t invent this stuff!
A neighbor of ours in Hollywood begged me come along and do the audition – Rick played drums.


We appear and it’s total chaos and big broad hilarity. Shit is loud as ten transport trucks stalling in a living room.
The basement is over packed with hangers-on, dudes from the neighborhood and strangers. We sit through an hour of potential prospects, none who could string two bars of note sense into a complete song, when we are called on.


The leader calls a Smokey Robinson tune – we play with few train wrecks. Phew! - First time today. A second song is called – big success. Suddenly, a guy wearing what looks like a dishcloth around his head points to the back door and kicks most onlookers out – then down to serious business.
A band spokesman comes over and starts giving showtime directions. “When I give you the cue the “Splash” will exit the laundry room and pick up that microphone – they are putting on show costumes at the moment – you guys hit it when I give the word.” I’m hearing and about too bust a laugh rib.


Confusion continues until one guy comes over picks up a microphone plugged into a Fender Twin Reverb and suddenly the sound, “kack, glitch, snatch sprays the room”, ..the sound of a frayed microphone chord in all of its blissful coughing cracking ensues.
Rick and I look at each other barely containing ourselves when ace basement emcee runs in and yells ‘ Are you Ready?”


We hit the intro and somewhere beyond basement sinks and towel rack I hear .. “I never met a girl who makes me feel the way that you do (you're alright) Whenever I'm asked who makes my dreams real - I say that you do (you're outta sight) So Fee, Fie, Fo Fum, look out baby, 'cause here I come,”
‘Ladies and gentlemen – number one soul brothers of L.A. – the mother ship has landed and you are about to be transported by – The Cosmic Splash!” - in full Buck Rodgers space suits - sort of cheap Commodores drag before the first paycheck; smooth dancing their way out of laundry closet to main stage in recreation room.

Oh man, like I said, you can’t make this shit up.


One space creature reaches down picks up microphone and it stings back – fire crackling into one long painful buzz. Then the four try to hand hold together and do harmony bits and dance when microphone gets seriously angry - calls it quits. CS looked beaten like they’d returned from one of those Watts riots after confronting the LAPD.
Anyway, we were assigned  second spot on the bill before Frankie Gaye.


Frankie emerges late in custom cut Rolls Royce and role plays Marvin. Walks on stage looking dashing like his famous brother then opens mouth and nothing comes out but wind barf and  wisp of a fake note. He then proceeds to sing Marvin’s hits absent a voice, but with all the memorized mannerisms. The crowd gets pissed. - many had waited for this clown  late by an hour or two for this – demand a refund.
In between rehearsal and concert I severely sprain my ankle playing hoops so I’m in deep pain and on crutches - just hoping for a quick exit stage right.


Afterwards, we hung around to get paid – the promised $80.
No one comes forth then we get word the promoter fled with cashbox and house receipts. Action moves to the parking lot. Its Mexicans and black musicians with posses on alert - two white guys with summer blond chick, debating who fucked over who? Then guns enter the discussion. At that moment Kristine looks at me and says,” Eighty dollars isn’t worth dying for,” Truly she was on the mark.


I telephone chased the promoter for four months even dropped by his pad– played Sherlock Homes on his ass until he paid half and told me he could have me killed or hurt L.A. style. Truthfully, I got paid more than Frankie Gaye – partial justice was served.
So, tonight I’ll be shooting Martha and Smokey and recalling the craziness of those times, the good, the bad and insane and lapping it up. Long live Motown!
Posted by Bill King at 1:10 PM