Chops on the Menu (Pine vs McLaughlin) 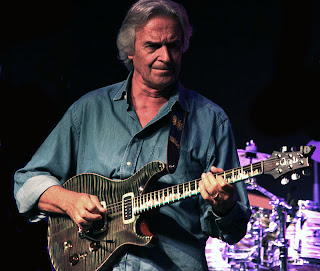 There was a time I reveled in speed madness. Chick Corea ‘Got a Match’..how many times did I spin that finger busting ditty. It rippled with complexity and note abundance – every stem hang perfectly placed and calibrated to great effect.  Watching McLaughlin’s keyboardist Gary Husbands hands Olympic track and field sprint from start to finish line was mesmerising.


Guitarist McLaughlin has played big league  nuclear fusion from day one – one of a handful of six string innovators in this genre. Al Dimeloa was there on the same day and the earth cooked up new steam with Return to Forever.

Saw both bands in the early seventies – Mahavishnu at Convocation Hall and RTF opening for Weather Report at Massey Hall. The victor that occasion was Weather Report – simply put – Jaco Pastorius commanded the stage and the audience affection.
I became a bit fixated on the idiom but stayed closer to the Herbie Hancock side with the Headhunters – if it ain’t got funk, it ain’t got me.


Last night McLaughlin was in brilliant form as was every player in his band. The notes still came AK47 blasting – clean, calculated, precise and purposeful. McLaughlin himself has that silver grey look of a younger Kirk Douglas – spritely and confident even when seducing the blues.
Courtney Pine! 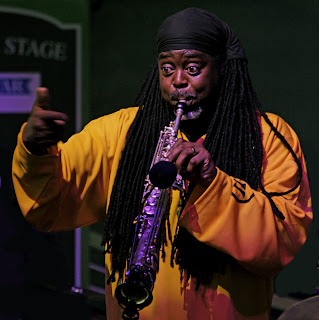 
From the downbeat Pine busted into that circular breathing exercise and never let up. This was back when England was trying to deliver him as a serious jazz player. Talk about a crowd slayer.


All 5,000 got up and left the room and headed towards the great smouldering outdoors for a flying fish sandwich and taste of rum. Now, this is a country with insecurities about mainstream jazz. You couldn’t have booked Dave Brubeck after that encounter.


In recent years Pine has dimmed from view – to much grand talent fighting to get on the tour wagon than deal with this silliness.


Last night it was three chords Soca – each play - the same rewrite of the song previously slaughtered.


Pine began with a bombastic assault. Every trick and gimmick, every circus Lumpkin was exorcized from his soprano sax. It was like he was cleaning the valves – carbon build up. 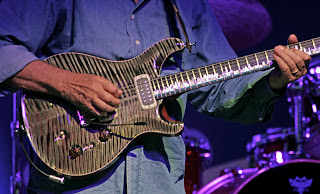 Now, these carnival acts can be crowd pleasers and no doubt those who had come from the suburbs thought this to be Sonny Rollins at his finest – but those sophisticated downtown elites know a thing or two about con acts. The con was in big time – groveling sax - blowing for an ego massage.


Here’s the big difference between McLaughin and Pine – the battle between art and the artless.


Those twelve notes can significantly move the universe or bury it under piles of useless debris. Last night we witnessed both.
Posted by Bill King at 6:05 AM