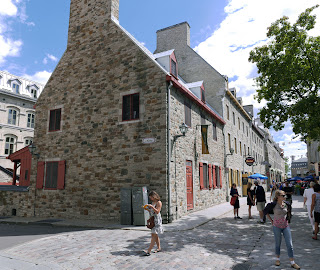 Travel photography is all about finding unique situations – the view from above, the close-up in a crowd – an unexpected portrait – movement, light, detail. All came in play at the 2013 edition of the popular New France Festival in old Quebec City.
The city was momentarily costumed in its 17th and 18th century roots with concerts, parades, dress, food and beverage. The streets overflowed in historic merriment all in centuries old tradition.


It began at the Port of Quebec with the off landing of the L’Aigle d’Or which carried with it 36 women known as the ‘King’s Daughter’s’ sponsored by Louis XIV. In fact, this year's theme was built around the impactful event (1663-73). In total 800 women made the voyage.
These were pioneering young maidens sent from France some 350 years ago to populate New France. They were drawn from overflowing Catholic orphanages; women as young as thirteen years of age. All were rewarded with a dowry and potential spouses. There was a brief  time allotted to either accept or seek another male partner. If a mate was not found acceptable life was served in a convent. 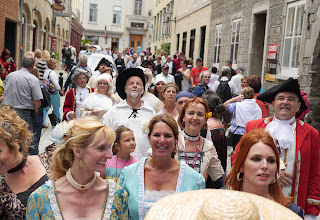 To Our Heroines was a fitting tribute to the women who made the near impossible journey, survived the harsh winter climate and with great strength and resilience are the foundation and legacy which nurtures contemporary Quebec.
No province stands as dissimilar to the rest of Canada as Quebec. The province addresses  heritage and culture with great compassion and commitment without being the unwanted quest in the room. It’s been a long battle to preserve language, culture and identity; all worth the struggle.


During the week we dressed as noblemen and dames - walked the streets as though locked in a time machine. Weaved in and out of crowds of visitors all with cameras and camcorders and smart phones lifted to document the moment - then a brief reflection into a past forever enshrined at the Museum of Civilization, Naval Museum, The Ursuline Garden; a moment in the monastery’s courtyard. 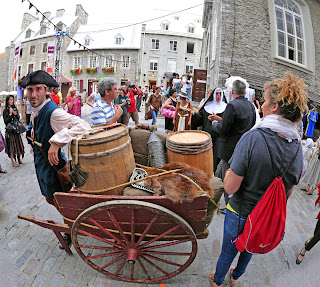 Quebec City is a sumptuous treat for anyone with a camera. Built on the slopes and sides of the Laurentian Mountains and fitted with cobblestone streets, narrow alcoves and long pathways – the eye needs to pause and examine the possibilities. Restaurants facing the main streets are fitted with decorative hanging pots colored with seasonal flowers which become more visual against the light shaded Trenton limestone building carved from rock formed during the Ordovician Period, some 427 million years back.


One exhibit that keeps reappearing in memory – Paris on Stage (1889-1914) at Musse de la Civilization.
The Belle E’Poque Paris comes to life the moment you place the earpiece from autoguide firmly in head with cafes, orchestras, bustling street life, circus costumes, sculptures, photographs, automobiles, velocipedes, cinemagraphs reverberating in a carnival like atmosphere. 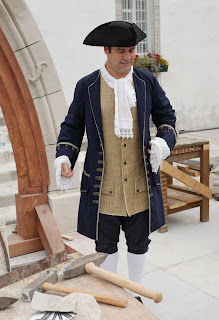 Fall is near and the camera begs another journey. Keep in mind the leaves of summer paint the region in rainbow schemes as winter's chill descends. No better time to capture Quebec City. The palate is in your hands. 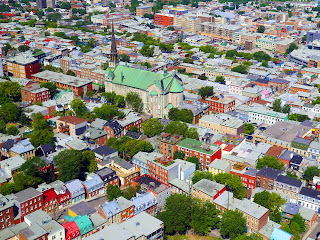