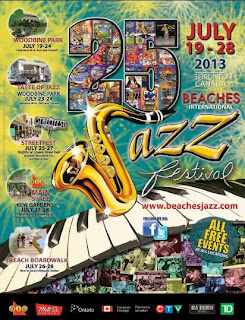 How do you interpret twenty-five years of Beaches Jazz history when you are not inclined to invest much time looking through a rear view mirror, yet this day begs for a bit of reflection.
In 1989 festival president Lido Chilelli and I came together from opposite directions, both arriving at the same junction.

I was producing and hosting the nationally syndicated Jazz Report Radio Network and publishing the Jazz Report Magazine when executive producer Bruce Davidson asked me to look for a location suitable for a jazz festival. Bruce had an in at Vickers and Benson ad agency who were contemplating such an undertaking through Amstel Beer.

I jumped on my bike and began cruising along the Lakeshore eventually finding my way to Kew Gardens east of Woodbine Avenue where I heard music playing in the distance. That afternoon is just so happen to be Rosemary Galloway’s Sisters of Swing. We chatted briefly and Rosemary explained weekends during the summer the Toronto Musician’s Association through their Trust Fund subsidized concerts in parks.

The rustic green platform serving as a performance stage was in need of repair and not nearly large enough to house a full blown festival yet I assured Bruce I had found a sweet location. The two us of then made the drive east and Bruce was instantly sold on the venue – one surrounded by trendy shops, a ball diamond, gorgeous park and lake nearby.

The next step was Amstel’s move – get their beer in local pubs and restaurants.

A few weeks pass and I get a call from musician John Cleveland Hughes from Lido’s in the Beach inquiring if I’d like to be part of a new jazz festival coming in the Beaches at Kew Gardens. At first I thought John had chatted with Bruce but that wasn’t the case. He told me an Amstel representative had been by Lido’s in the Beach and was trying to get the beer on tap. John went on to say he wanted me involved as emcee and help with booking.


In no time a festival was born and the first held – July 25th- 30th 1989. The first days show’s were held at Lido’s in the Beach – the 29th and 30th in Kew Gardens. John and I mixed the program up with Carlos Lopes Group featuring the late Earl Seymour – Rick Lazar and Montuno Police – Brian Hughes Group – Memo Acevedo’s Latin unit. The two days brought over 10,000 people together in the community and $10,000 to our designated charity Senior Link.
I could go year by year and this could turn into a long winded dissertation but let’s try this.


The early years were a mix of enthusiasm, ambition, excitement, and challenges. Politics would come in play - both a positive and decisive factor in surviving to the present day. Mayor’s have come and gone – June Rowland, Barbara Hall, Mel Lastmen made the customary Sunday journey expressing kind words to a captive audience extolling the virtues of community and jazz festival. Tainted politicians used the same platform to only batter and undermine a couple days later the first decade and most of the second. We spent many hours at city council defending and guarding ground earned by running a successful populous festival. I won’t even go there other than to say – everything you see on television about politicians is true.
Councillor Jack Layton was present every summer and spoke glowingly about the music and organization. Layton was one of the people you engaged backstage. You knew he was a polished politician yet he would drop his guard and embrace his playful side. He didn’t come with handlers – just a bike and oversized cell phone that looked like it was smuggled off a World War 11 battlefield.


We realized we didn’t have the dollars to import marquee acts so we did what we were destined to do – build from emerging talent in our community. Hire local and provide a big stage and publicity for our own. We did that starting day one. I knew being a musician the chances of getting on a stage near a touring international act was near impossible. We were still battling the Canada is inferior mindset. So, we set out to change that.

Another contentious issue was breaking the gender imbalance. Women in jazz was difficult for hard core jazz devotees who saw jazz a private men's club. You can thank Molly Johnson, Rita Chiarelli and Jane Bunnett for opening doors and swinging them wide. Twenty-five years ago a woman had to be a singer to stand alongside men, those few who played an instrument were rarely bandleaders. Then come Lorraine Desmaris Trio, Lee Ping Ming, Liberty Silver, Brandi Disterheft, Julia Cleveland, Emile-Claire Barlow, Carol Welsman, Ingrid Jensen, Alex Pangman, Suzie Arioli, Ranee Lee, Heather Bambrick, Lorraine Klausen, Michelle Wilson, DaTalle – singers and instrumentalists. Twenty-five years later the bandstand is a much different inclusive environment.
The same can be said for ethnic diversity. BIJF has changed in accordance to the immigrant make-up of our city. That has also altered the way we program. Latin, jazz, blues, world music, indigenous and nearby. We are now a music festival with many shades, rhythms and attitudes.


I’m often asked for a memorable moment – my favourite experience. I still like recalling when I was in my early forties - the beginnings and wife Kris and I would ride our bikes from St. Clair and Bathurst area most every day and back at night through the wooded areas – truly exhausting but exhilarating. Eventually, Lido took mercy on us inviting us camp over the Saturday night to Sunday to relax and conserve energy. That was always a family blast!
Shows? I will never will forget Steps Ahead with Billy Kilson drums, Darrell Grant’s band with Brian Blade drums; mesmerizing! The New York Voices, Johnny Pacheco’s band, Nathan and his Zydeco pals, Dave McMudro Jazz Orchestra, Joey DeFrancesco, The Fabulous Thunderbirds, Hilario Duran, Robi Botos, Francois Bourassa Trio, Jody Drake, Bobbi Sherron. Booking the great Ernie Andrews after catching the documentary South Central on PBS and hearing him recorded with the Gene Harris Philip Morris Big Band was one of those dreams come true. My kind of singer.

Andrews was a handful and a hoot. We combed  downtown Toronto for the best chicken dinner and fine vodka and just talked music. That voice cut through the sheltering pines and dense bush near  the Alex Christie band shell and embedded in the landscape for eternity.

And there is Betty and Jerry Davis who come every year; first from Kansas City, then Memphis, outside Chicago – wherever they are at the moment. They never miss a year and bring with them that kind middle American charm.

The rains were torrential and we were pleading  mercy having booked young singing star Hal Linton from Barbados and my hero Jimmy Hall of Wet Willie’s fame who was killing with a new recording ‘Salty.’ Christ sake I love that man’s voice.


The rough weather was unrelenting and it looked as if the lake had moved inland back of stage. Linton and band couldn’t get out of van buried in three feet of water - so back to hotel and return trip home. Saturday was toast – first time ever.

Sunday comes and the rains persist yet we can still get players on stage. Hall is backed by guitarist Tommy Talton – a good player and band. By now I’m physically and emotionally drained. Hall’s standing back stage fiddling with tenor saxophone and I introduce myself and tell him what a fan I am –  I rarely do this. The band begins and rain picks up. My brain is screaming inside – bring Jimmy on – that voice, that voice. One song passes, another, another, another .. no Jimmy – he’s backstage toying with sax reed meanwhile Talton’s doing all the singing. Another  song passes, then another .. I’m at the end the platform and ready to jump in and drown myself when Hall walk’s on stage and band begins again – I feel a rush – then Talton starts singing again and Hall just plays sax. Goodbye!  I told stage manger Rico Ferrara I'd had enough and was going home. Never saw my Jimmy sing.
The years in between have been amazing – the talent the hang - so many players and conversation with people. The street scene with hundreds of thousands dancing and celebrating. The nightly visits  and greetings to players - the heat, sore feet, the exhaustion.


A few major occurrences helped dig deep roots for the festival. I’m guessing it was year three when we hired publicist Martine Levy who at the time was handling PR at the Blue Note club now tops at DDB Publicity and as solid  a person and partner as there ever has been and a delight and her team, Rogers Cable television and Kerry Gordon who videoed the early years - the two of us would book a day and film intros and extros making each main-stage performance a compact half hour show played endlessly for years on Rogers Community access television. Joey Cee’s tireless work on programs, art and pounding the community testifying to the BIJF virtues and steady cheerful demeaner; assisting wherever needed. Lido, who has been the driving force for all of this. We have high-fived each other numerous times and battled the enemy when confronted. Pat, Rico,  Julie, Joanna, the volunteers, families, neighbours, those who do the structural hands on poles in the ground work. My family - Kris and Jesse and band mates, you da best!