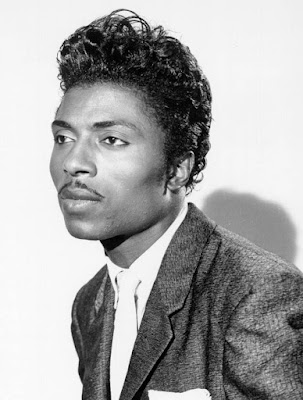 It's been 25 years since I've smoked a bowl of hashish, and none more exquisite than shared in January of 1971 with Little Richard, the Bronze Liberace. At that time, I was the keyboardist and vocalist for Homestead, a Toronto act that caught the attention of Guess Who producer Jack Richardson in 1970.

Homestead concerts were testimonials against the Vietnam War and the degradation of the environment. I wore more Canadian flags than seen springtime on Parliament Hill.  Jack understood my position and my opposition to the war. He rolled with the situation, doing all he could to calm me --although I made the task nearly impossible.

We’re booked to do a 7:30 pm set at Queen’s University, opening for Little Richard on a stage outfitted with humongous Traynor speakers. Back then, the size of a mid-size car, with sound quality when fully exercised akin to blowing wax paper through a comb.

We’re playing the opening set, at first received as if sentenced to public embalming. Then I gave my “save the planet” pitch, and things began to warm up. Round one: we scored.
Downstairs in the dressing area, Little Richard has yet to show, owing to a bomb scare somewhere over Cleveland. Richard refuses a chartered flight to London, Ontario, apparently fearing the plane would crash. 11 pm, he arrives by car, half an hour after the second set scheduled.

I'm killing time with a quarter ounce of Lebanese hashish. Suddenly, Little Richard's band arrives and catches the action.
“Hey, bro,' what's smoking," says a member of the horn section.
“Hashish,” I reply.
“Les’ has some.”
Smooth talkers? I cut a couple of grams loose, and the horn guys disappear into the men’s room - unloosen a toilet roll, untangle foil from a cigarette pack, punch a few holes--et voila - big high.

I'm chatting with the promoter when Little Richard walks up and demands his pay. The promoter turns and instructs Richards to play first. Nearby, Richard’s bodyguard looks on taps at his shoulder-holster under his suit jacket as if to say, “listen up.”

“Pay me, motherfucker or I don't play," says Richard.

The promoter pauses. “This isn’t good; I have to go up to the box office and count the money. I hope they’ll agree to do this."
“Get moving," urges Richard.

I'm sitting, staring at this rock & roll icon, baked in heavy pancake makeup, not knowing what to expect. In a huff, Richards starts lecturing about “taking care of business.” Then the first trumpet player returns hovers above, and says to me -, "Give me more of that good shit." I couldn’t believe the audacity of this snake. Richard jumps into the conversation, "What shit?”

“The hippie got some bad hashish," says viper man.
Richards looks at me. “Is that so, I ain't never smoked hashish - is it any good?"

“Light me some, hippie guy - I need to get high." I do just that, and LR gets his love on. "This shit is outrageous," he says, wearing a big broad smile. The next 30 minutes, we continue bowl lighting.

"What's your name? It's Bill! Your band? Homestead, huh? Tell you what Bill - I like you, man. Paul McCartney is playing on my next album and me on his - then I'm playing on yours." I'm young - cynical and don't give a shit. Little Richard is in the house and playing me for my remaining gram.

The promoter returns, Richard collects half-pay, hits the stage, and rocks the room. Next to Little Richard, I felt like a curio figurine, a miniature entertainer – him - long, bold history, and I'm a witness.

The amplified sound was horrible, but who gave a damn. Richard's foot hits the floor like a sledgehammer - he sings in ungodly tones: first “Lucille,” then “Blueberry Hill,”  “Bebop A Lula,” “Good Golly Miss Molly,” “Midnight Special,” “Tutti Frutti” and on and on. Three years earlier, I'd rocked with Chuck Berry, but in no way did it compare to this jam.
Half time! We're back in the waiting room.

"Hey B, got anymore of that killing shit,” Richard's inquires.
“Sure do.”
“Then, light me a bowl." That I do, as his band quickly shows up sounding a chorus of “give us more." Are you kidding? I'm with the man, and I ain't blowing the remains on a  greedy horn section.

Richard seats himself next to the paymaster, who says, “Sorry, Mr. Richard. We have to wait until closing time to pay you.”

Get my money, or the night is over,” says Richard.
The dude reaches over and touches Little Richard.
“Get your fucking fingers off me, queer boy,” says Richard, alerting the bodyguard who moves in clutching a hidden gun.

Richard nods, says to the paymaster, “You get the message? Get my money.” Bronze Liberace looks over at me and says, “Fill the bowl, Bill---looks like a long night. You say that shit is Hebanese?” Eventually, the promoter pays, and Richard rips through a second show.

Afterwards, we're on our way home and stop at one of those unfriendly late-night diners. I walk in with my partner Kristine, and the catcalls start. “Hippie, dick sucker, fuck face...” Suddenly a tall, lanky black man in full pimp stride strolls towards the men's room. It’s Little Richard’s enforcer.  All talk ceases. Catcalls cease as all eyes follow.  Minutes pass, and the guy reappears. You can see the gun protrude under his short jacket. He taps, swings around, gives us one of those stares that freezes the fearful, then exits.

The last words I heard that evening were: "Fuck me, who the hell was that?” I look at Kristine and say, “Shaft!”

Looking out for Little Richard and other black musicians of the time was a full-time job. If you wanted to get paid, you had to have someone with a cold, cold look, an intimidating bulge under the vest and willingness to use it.