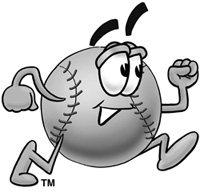 
I ask myself why I put myself through the morning pain of deciphering box scores. What possesses a sane person to anticipate something as trivial and useless as savoring a batting average, ERA, or the night’s run production? You would expect a person sporting eight-inch thick lens – living in an isolated basement room shuttered from the outside world eating canned beans prime candidate. Not the case! I am that guy - sound of mind and curious with life options.
Baseball has been in my blood since I began watching my boyhood idol Mickey Mantle whack them out of Yankee Stadium. The box score confirmed my hero did everything witnessed the day before. In fact, with newspaper in hand I could compare Mantle’s stats with the Giants Willie Mays or even upstart Roger Maris.
I’ve been reading morning newspapers a good fifty-five years saving the sports section until I feel earth is properly aligned with baseball heaven. Some folks are bred on the business section of which I remove along with the classifieds and whatever sales items fail to interest. That leaves me section a, b, c, and sports.
If my Blue Jays lose the night before I will wait until sections a, b, and c have been milked of every retainable sentence minus the gruesome details of an on-going homicide investigation.


This season has been particularly hard on me and my reliable box scores.


What began as a season of promise has tanked in a manner that would drive a less that sane game addict take a few bat slaps to the head.


Spring training is probably the least effective gauge of things to come. My beloved Blue Jays looked like the Cincinnati Reds of Joe Morgan – Johnny Bench days with Pete Rose running wild going 24-7. I bought into this like the sucker who buys a Rolex watch in a Holiday Inn parking lot. Winter drives mind and body to places where only imagination truly satisfies - usually a ride on the fairyland express. Yes, there is a baseball fairy. Look under your pillow and discover an X-ray and a note detailing nine months rehab.


The 2012 season started with a huge burst of dream steam with the Jays winning 24 of 43. Then the world collapsed as one by one player’s began to drop like frozen turkeys from that WKRP promotional episode. Goodbye Kyle Drabek, so long Casey Jannsen, Drew Hutchison, Brandon Morrow, Sergio Santos to injury. Then of course ace starter Ricky Romero began pitching like it was batting practice.
Through all of the mound mishaps I still had my power line-up – a place to bum a thrill.
Edwin Encarnacion, Jose Bautista, Brett Lawrie, J.P. Arencibia, Colby Rasmus, in-coming Adam Lind, Travis Snyder – oh my – the 1927 Yankees. That beautiful box score was giving and giving. Encarnacion and Bautista – whack a whack – home runs – RBIs - Rasmus sneaking up the power alley. Adam Lind finds his power swing – Travis Snyder flirting with a .300 batting average -then the apocalypse – Bautista, Lawrie, Lind, Arencibia - injuries. Travis Snyder traded for pitching. Rasmus lingering groin pull.
Today it is August 20, 2012. I open the paper and another severe beating occurred. My Jays have been thrashed; bashed and stuffed like zoo pigeons. My delicious box score is nothing more than a grave yard collecting zeros. I’m in serious pain here. Pro football season is weeks away and basketball will be another eighty-plus games of teeth extraction. Damn, spring training is eight months away. I sense a pennant!