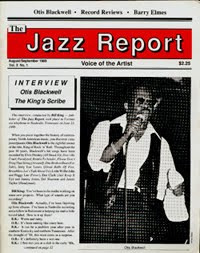 When you piece together the history of contemporary North American music, you discover composer/pianist Otis Blackwell is the rightful owner of the title, King of Rock 'n 'Roll. Throughout the past 30 years, Blackwell's hit songs have been recorded by Elvis Presley - 'All Shook Up, Don't Be Cruel, Paralyzed, Return To Sender, Please Don't Drag That String (Around), One Broken Heart For Sale', Jerry Lee Lewis 'Great Balls Of Fire, Breathless, Let's Talk About Us', Little Willie John and Peggy Lee 'Fever', Dee Clark 'Just Keep It Up' and Jimmy Jones, Del Shannon and James Taylor 'Handyman'.

Bill King: You've been in the studio working on some new projects. What type of sounds are you recording?

Otis Blackwell: Actually, I've been finishing up three albums. I'd been in Nashville recording and a fellow in Baltimore is helping me start a little record label. How is it up there?

B.K: It can be a problem year after year in southern Kentucky and northern Tennessee. After the drought of '88, this must come as a surprise.

O.B: It's definitely a wet one.

B.K: I first met you at a club in the early '80s, when I was playing with Ronnie Hawkins and the Hawks. I managed to get one of your promotion leaflets and was astonished at the number of hit rock 'n' roll songs you have written. Where did all this music come from?

O.B: I really don't know. When I was young, I just sat down and started playing Chopsticks at the piano. I got so far and then lost interest. Eventually, I regained it and started writing songs.

B.K: Was there music you heard when you were young that helped you develop a style of writing?

O.B: I didn't play much early on. What I really liked was cowboy movies. I was a big cowboy fan and liked western music. You couldn't get that stuff where I lived, so I hung out at a little theater that played Gene Autrey and Tex Ritter movies. Tex Ritter is still my favourite singer.

B.K: Did you listen to a lot of radio?

O.B: Yeah, but I didn't get to listen to country music. When the radio was turned on in my house, you had either spirituals, the news or Chuck Willis and Larry Darnell.

B.K: Was it difficult to get people interested in your songs?

O.B: When I started writing it was kind of hard getting people to do my stuff. They say they couldn't do my style. At one point I decided to open an office at 1650 The Brill Building, which is supposedly where all the great music writers have theirs. I opened it and down the hall was a business school. Students would pass by my door, and, eventually, some came in. They looked around and asked, " Are you a songwriter?" I said, "Yeah." " You wrote such and such.Yeah, I did." On my wall I had people like Elvis Presley, Peggy Lee, James Taylor and six or seven other white artists and the kids said, " How come you don't have any black artists on your all?' I told them. "That's my gold wall, and they're the ones who sold millions. I've never had a black artist do that with my songs.

O.B: No, I was getting a lot of covers, but either they weren't getting out or just weren't clicking. I think the one that really happened was Fever with Little Willie John. But, it only went so far because Peggy Lee jumped on it.

B.K: Was there more interest from black producers and artists after your first successes?

O.B: There were two gentlemen. One was Henry Glover, he dug what I did. I got a bunch of records through him. The other fellow, Calvin Carter, was from Vee Jay Records and he recorded a lot of my material. Other than those two, I didn't get much interest.

B.K: How were you able to get you songs to Jerry Lee Lewis, Elvis and Peggy?

B.K: Did they treat you right?

O.B: Oh, you better believe it. It was slow at first. You had a lot of late hours, but that's all part of it. Now, you don't have to wait to record. You can spend five to eight dollars on a cassette and they don't even listen to it. I'd hate to be a songwriter starting a career today. So many independent publishers and they're all important. They've done a lot of wrong things, but some good as well.

B.K: When the movie 'Breathless' came out, did things begin to turn around again?

B.K: Years ago, I met Don Covey, Tommy Tucker and Johnny Nash in a New York studio called A-1 Sounds. They were all selling songs to the owner, Herb Abramson, who held the publishing on 'High Heel Sneakers'. It seemed every few years his fortune would increase when Elvis or Jose Feliciano would record the tune.

O.B: I talk to Herb every time I go to California. We hung out a lot and had many a good time. He's still driving, but he can't see right; he drives that car like he's crazy.

B.K: He's the first producer I met in new York when I was there in 1967. I was down and out, had a couple of songs and he bought them.

O.B: He was the original partner and founder of Atlantic along with Jerry Wexler and Ahmet Ertegun. They all started it together.

B.K: I always wondered why Herb and the others parted ways.

O.B: I think he went into the service and, by the time he got out, things had changed. I really like doing that old stuff and he's got a good ear for that. That's the way he wants to record. His thing is rhythm 'n' blues.

B.K: His door was always open to black artists.

O.B: He understood the music. We're all in it to make money, but hew really loved it. He talks it all the time.

O.B: I used to be with a publishing house called Roosevelt Music. A gentleman there told me he had seen Peggy Lee perform Fever in Las Vegas and I found out later she wanted to record it.

B.K: Did you ever meet her?

O.B: No, I didn't meet her, but came close about three years ago - it was too crowded. I was to meet her after the show, bit I didn't want to hang around and deal with the crowd.

B.K: Did you ever attempt to talk to any of the artists that had considerable success with your songs?

O.B: I never really wanted to meet them because there's the problem of getting between the artist and the manager. It can get kind of funny at times. I always figured it was best if I write my songs, take them to my publisher and just lay back. There used to be so many things going on - getting to the artist, getting to the publishers - you know, politics. I just didn't want to get mixed up in all of that.

B.K: Did you ever do anything with Sun Records?

O.B: Yeah, I met him a couple of times when I went down to Memphis. That's as far as it goes. I used to go down every year for the remembrance of Elvis' birthday. Memphis State College invited me to sit in the auditorium and speak to the people for one of those Elvis days.

B.K: When are they going to have an Otis Blackwell Day?

O.B: I don't know - it might be nice. I'm very low-keyed. There have been many times when I've been asked to appear and I'd say to myself, "What am I going to talk about?' Early on, when I did interviews, I'd tell everyone, "Don't ask me about dates. I don't even remember what I did yesterday."

B.K: How did you come up with those wonderful bass lines that were at the core of the music?

O.B: I started as one of those two-fingered players, then graduated to three and four fingers and, eventually five. I played a little boogie-woogie and the shuffle, so I wrote over that. Then the Beatles came over and knocked that out.

B.K: Where did you grow up?

O.B: I was born in Brooklyn and still live right around the corner from where I was born. Everybody used to tell me to go to Nashville, and I'd say, "OK, where is it?" I started coming here years ago to hang out, and now I love it.

B.K: Any plans for the future?

O.B: I've decided to run back in forth between Brooklyn and Nashville. I like this town, it's really great. They've put me in The Nashville Songwriters Hall of Fame. This town is about music. It's about the kind of music I like. I've also started a small record label, so I've done an album. People always talk about what I've done, but this is what I'm doing now. I got behind that pencil and nothing happened for many years, but since they put me in the Songwriters Hall of Fame, I've turned around. I took a good look at myself and said, " I think it's time to get back at work."

B.K: How has your writing changed?

O.B: You know my thing was always about I Love You. Your Feets Too Big and that kind of stuff, so I figured I'd sit down and write something different. One of the new songs deals with the situation with guns, and another one deals with the homeless. I've got two or three rock 'n' roll tunes. It's the best stuff I've done in a long time. I've taken my time and worked on them for a couple of years.
Posted by Bill King at 6:49 AM