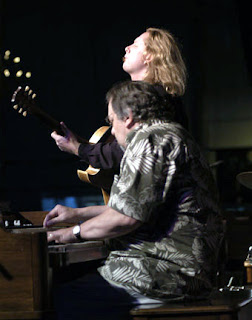 Doug Riley: Clayton and I knew each other when we’re teenagers back in the 60’s.
He just drove up from New York to get me involved in this thing where we can talk about the old days. The Yorkville days and the Bluenote. They want to interview me and want me to tell a whole bunch of lies about Clayton.

Bill: You go back to the Bluenote era in Toronto.

Doug: I was there from 1962-1964. It was Thursday Friday and Saturday nights with Shawn Jackson, Diane Brooks, Sherry Matthews, Steve Kennedy in my band the Silhouettes. We used to go down to Buffalo on the weekends and buy R&B records bring that back and put them in Al Steiner’s jukebox and learn them ourselves. None of them were on the air locally.

Bill: Is this where the B3 was put to good use?

Doug: I didn’t have a B3 then but an M101, a smaller Hammond version. A year or so later I bought my first B3. It went into storage when the synthesizer came in vogue in the eighties.

Bill: Did you ever get used to that?

Doug: No. I refused to play them. I just went back to playing acoustic piano and Fender Rhodes.

Bill: Was it a time thing? The synthesizer came with a new language.

Doug: I would play it in the studio for string sounds and other sounds but if someone wanted an organ I refused to play it from one of those presets. I’d tell them get a Hammond!

Bill: What is your set up now:

Doug: I have two B3s and a C3. I have one B3 in the basement I bought back in the sixties. It was my touring organ especially when I crossed the country five times with Doctor Music. It’s a little wobbly. Otherwise I use a mint condition B3 and C3 and several Leslie’s for my live gigs.

Bill: Coming through the seventies, eighties and into the nineties when you were consumed with studio work did you ever envision a return to live performing?

Doug: No! One of the main reasons was the B3 came back in vogue. I would play piano gigs. After twelve or so years of people trying to replace the B3 all they could say was the instrument they created was lighter. It certainly didn’t compare musically or sound wise. People are hauling them around again therefore I got interested in playing again.

Bill: You don’t hear much about synthesizers anymore.

Doug: No! We know they are out there and have a use and are great for making demos.

Bill: The character of the sounds hasn’t changed much in years.

Bill: When the Rhodes and Clavinet were introduced in the sixties they found specific rolls.

Doug: And they still do and they are wonderful instruments. I regret getting rid of my Wurlitzer electric piano and my Clavinet. I still have two Fender Rhodes bought the first week they were introduced at Manny’s in Manhattan.

Bill: As sounds changed and the synthesizer gained prominence, the role of the keyboardist within popular music was diminished. It was no longer about performance but coloring. It was more about posing that participating.

Doug: I started writing more and more and playing less. It was something that didn’t interest me. I liked the records Herbie Hancock did with it but it just wasn’t my thing. I wrote and wrote and wrote and made more money than I could ever expect from playing. Eventually you get sick of that and bored.

Bill: Where you writing more for commercials or films?

Doug: A combo. Besides film and commercials I was writing for a lot of artists and many different styles of music. From jazz, rock, pop, country to Placido Domingo with the London Symphony. If someone called I wouldn’t turn it down because it was this or that kind of music.

Doug: Right now I’m more into playing. I’m creating that new balance; more playing less waiting. Writing has been secondary in that sense but primary in my earning capacity.

Bill: You retreat to Prince Edward Island four months a year. Are you able to shut it down?

Doug: I’m semi-retired now. All that means is I’m not really less busy but saying no to many things and only taking that which I really want to do. I’m playing much more golf. Walking on the beach with my dogs, reading books and lying in a hammock. I still fly out of there to do concerts in fact in the four months I was there I probably flew out of Charlottetown ten times. When I go back it’s my center and I’m much more relaxed. The pace is like twenty or thirty years ago. The people are so warm and relaxed.

Bill: Is the atmosphere conducive for composing?

Doug: Oh yes. I write a lot out there. I was commissioned by the Toronto Symphonietta
to write an concerto combing classical and jazz. I’m writing with piano, bass, drums and alto sax in mind and orchestra. I started working on that in P.E.I.

Bill: Are the skills you have for orchestration something you developed early on?

Doug: I studied it when I was at the faculty of music in the sixties. Still again, that was learning from books and studying scores. The only way to learn it is to play it and be made a fool several times. I learned on the job and in the studio. The stuff sounded terrible at times then others pretty good. Eventually, you find ways to make it sound good most all the time.

Bill: Do string players scare you?

Doug: They always did and still do for many different reasons. They will sometimes get to the point in the music and won’t play. They question things all the time. I mean if you put two string players playing a semi tone apart they will always question it. For brass and reeds that’s normal in jazz. In classical training you just don’t do these things. It’s new training for them.

Bill: Do you go through periods where you have to spend a lot of time at the piano to keep the hands in shape?

Doug: When I first started working with singer Michael Burgess six or seven years ago I did a lot of practicing. His performance covers a wide breath of pianoforte. I don’t practice when I’m playing live so much. When I was in university I practiced basically eight hours a day for five years. Four hours in the morning before lectures and four hours after in the dungeons of the faculty. I lived like a monk. If I haven’t done something for twenty or thirty years I will sit down and work my way through it. I don’t sit down and play scales and arpeggios every day and I bet you don’t either.

Bill: You were once part owner of Revolution Records, partnerships with Larry Trudell and Tommy Ambrose in an extremely successful commercial house and other business ventures. Have you closed the pages on that period and work mainly freelance?

Doug: Totally! I’ve eased out of the jingle business and just write for clients I’ve had for many many years. I’m not going out hustling any new business. I did it for over thirty years in a pressure atmosphere with deadlines all of the time, constantly competing with what’s out there and always dealing with committees.

Bill: You’ve going to Edmonton in the New Year to work with PJ Perry.

Doug: Yes! We’re playing the Yardbird Suite in February hopefully in Calgary in January. I want to start recording these dates. I’d love to have a recording with PJ and the B3 quartet. He’s been wanting to do it all of his life. We played last year in both cities and it was just fantastic and had a wonderful time together. I’ve got a duo CD with Guido Basso, organ and flugelhorn that are to be released on Justin Time.

Doug: Just one other note. I’ve put a new quartet together with Chris Mitchell on Saxes, Jake Langley guitar, Terry Clarke on drums and my son Ben when Terry can’t make it.

Bill: Jake got good mileage out of his debut with you.

Doug: He most certainly did. I’m sure all involved are happy.
Posted by Bill King at 2:34 PM