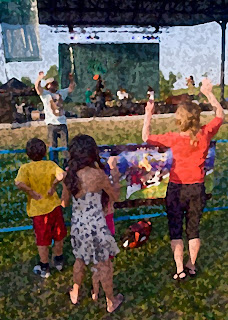 In early 1967, I found myself stranded in a woefully depressed town south of Long Beach, California where the stench of petrochemicals and burning industry suffocated the natural habitat. A search for a new beginning and desire to join a growing movement of committed young people seduced the imagination. My life in the Midwest succumbed to daily rituals of catcalls, threats and other forms of nefarious harassment courtesy the local redneck population.

My exit was sudden given to bouts of anxiety and uncertainty. Right-wing politicians instilled bitterness in the hearts of loyal patriots accusing longhairs, peaceniks and free spirits of undermining national institutions and authority. The transparent values of the 50’s hastened the erosion of symbolism giving birth to a revolution beyond the control of bankers, politicians and lawmakers.

After a few months performing in beach communities along the southern California coastline I magically wandered into the not so impressive city of Westminster. It was there I secured work in a Hispanic rock band led by the Sabori brothers who flirted with their own brand of revolution. We had three things in common; a love for rock and roll, distrust of the police and long shoulder length hair. Bassist Andy Sabori and I spent hours peering into a door-length mirror the end of a narrow hallway of a shared apartment - grooming every precious follicle. By night we’d ramble through the psychedelic hits of the day before a beer-swilling crowd of middle aged men who paid admission to spew obscenities at semi-nude topless dancers. These clubs dotted the landscape from San Diego to Seattle. This was not the life I had envisioned but it provided temporary wages enabling weekend excursions north to Hollywood.

My first visit to the Sunset Strip fifty miles north was to the legendary Hullabaloo club. I watched the weekly television broadcasts direct from the club during my final year of high school. Bands like the Buffalo Springfield, the Kinks, the Standells and Leaves exposed millions of young people to new and progressive sounds.

The Sabori’s of Westminster were imitators content with posing and lacking the minimum in basic music skills. Andy faked bass relying on a broad grin to divert attention from shallow posturing. I worked double duty playing left hand bass - chords and lead lines with the right on a Farfisa portable organ. Brother Rusty also smiled a lot while keeping a less than consistent beat. His voice emitted a sound not far from that of a coyote looking for love in all the wrong deserts.

Hollywood offered a glimpse into the future. It was home to street hustlers, pimps and voyeurs - conning the most vulnerable with promises of easy access to a world beyond poverty of the streets.

While entering the Hullabaloo we noticed the only seats available were located down front of the massive stage. As we circled we crossed paths with master of ceremonies and one time teen idol Paul Peterson. Peterson spotted us and singled us out for one of those infamous 60’s calls to combat; “Hi girls! Excuse me, they’re not girls. It’s getting where you can’t tell the boys from the girls nowadays”. He then fished for big laughs. Needless to say Peterson struck a raw nerve. In our defense we stared the grease ball down - fixed eyeballs in locked weapon position. The Sabori brothers took it personally - temporarily cancelling future excursions up the Hollywood freeway. I took it in stride, besides I’d been battered with so many inane one-liners back in Indiana this was soft porn.

I was forced to commute by thumb and foot. Rides were infrequent interrupted periodically by vigilant highway patrol officers scouting for draft-age males. I marched through drainage ditches along side freeways past oil rigs pumping minimum crude. Several wells along the way had dried casting an eerie pall over the withered landscape. The heels of my Beatle boots separated exposing tender skin orcing the binding nails upward puncturing the soft meat of my soles. I was tired and numb and rarely felt the intermittent pain.

Eventually, I arrived at the Omnibus Coffee House situated on North Cahuanga Boulevard. The exterior was covered in wood and stucco. Above the entrance was a multi-coloured sign displaying the coffee house logo. Wooden beams embraced the insides giving it a quaint farmhouse look.

I encountered a nightly flow of young people lost in a world of cosmic dreams and psychedelic intentions. This is where Scratch, Rick, Denny, Carol and I would first meet.

Afternoons were spent sketching the menacing insignia of the Hell’s Angels on denim jackets worn by the occasional artless biker who relished the sanctuary of dim lit rooms. Drawing was my thing – something I spent many hours absorbed as a kid. There was a certain sense of security around these guys but I never trusted their intentions. I gave them exactly what they asked for and let it be. Besides it was the sight of young women parading around in tight see through fabric that kept eyes occupied. Evenings spawned endless jam sessions attracting an odd assortment of players.

I took up residence a block south in a skid-row hotel. The lobby entertained a bizarre collection of derelicts - aging Hollywood damsels and habitual criminals. At times the room would erupt in violence when someone would crack up moment suddenly one or two would assault the resident mailbox or newspaper stand. This was definitely a cast of freaks. Little men with no real life ahead and mouths cocked and loaded with complaints - an atmosphere of paranoia. Women with lipstick smeared from ear to ear. Some you could communicate with while others were just insane. Jammed between the derelicts were young hostile criminals who would explode in a moment of conflict. Everyone would scatter down the hallways and hide under beds until the police arrived. I usually slipped out my back window.


The occupants of the Omnibus slept near their possessions tucked away in various corners on the rooftop and back rooms.

When I first met Scratch and Flower they were holed up in a vault-like freezer in the rear of the building. Both had been warned of danger if by chance the door accidentally closed. Both ignored the message content with the security of their surroundings. Scratch slept with his aging Telecaster resting passively in his hands. Flower would curl next to him rarely leaving his side. Scratch was tall and thin with pointed features. Long blond hair split the forehead covering one eye allowing the other partial view. A yellow tint covered his anemic body consequences of hamburger dinners and nacho lunches. Flower’s short brown hair complimented her sinuous mouth and deep set eyes. Her clothes were drawn from light weight East Indian fabric. The two fought constantly occasionally withdrawing for a session of lovemaking.


Scratch’s father was a career diplomat stationed in Panama. When Scratch sensed his financial situation weakening a call to father would bring a few hundred dollars via Western Union arriving just in time for the latest Jimi Hendrix’s side.


During one of our late night sessions a hip looking guy wearing John Lennon spectacles emerged from the crowd and asked to sit in. We’d been assaulted by an endless stream of inept conga players and resilient folkies and agreed nothing could be worse. All ninety-eight pounds pulled three drums - hi hat - ride cymbal and fixtures to the stage.

One of us called out Dino Valente’s ‘Hey Joe’ and the groove jelled. We followed with Dylan’s ‘Like A Rolling Stone’ and blues anthems ‘I’m A Man’ and ‘Smokestack Lightin’ . Denny played with all the energy and enthusiasm of the Who’s Keith Moon - possessed with a great sense of time. I played left hand bass locking the unit together. We still lacked a front man who could sing. Denny mentioned a friend from North Hollywood named Rick he thought might work well in this situation. A call was made extending an invitation to a jam - Rick accepted.

When Rick first ambled down the hallway of the Omnibus I had difficulty putting the picture together. Here was a guy with the physique of a baseball player - sporting waist length coal black hair - a three foot tall Stetson positioned high on the skull making him look like the original suburban cowboy. He was loud, friendly and ready to rock. Jim Morrison was Rick’s adopted persona complete with spastic stage moves more suited to sucking up ground balls than rock choreography. The voice was no worse than most around Hollywood - short on range and dynamics but loud in delivery. The footwork was more military in design given to frequent spins resembling a two point about face maneuver. We actually learned to appreciate his exuberance.

We began rehearsing and performing nightly at the Omnibus attracting a modest following. Eventually the club owner took over management of the band. He was involved in launching a series of concerts in Griffith Park which he called “Be-Ins”. Anti-war protesters, longhairs, musicians and bikers frequented the early gatherings. Soon, the events would transform into “ Love-ins” as the international media picked up on the number of transient young people attending these events.

The rallies were a mix of vibrant colours with young teenage girls dressed resplendently in bright rainbow colored madras - wrap around wreaths of dandelions circling the head and decorative facial paint. The boys wore painted denim jeans - long bushy hair with incense in hand. Everybody was peaceful and friendly except for the numerous Hell’s Angels in attendance. The invading gang chilled an otherwise perfect mix striking fear in the Beverly Hills kids who liked to associate with danger but turned weak once things turned un natural.


We soon found ourselves performing at a second such gathering at Griffith Park for over thirty- thousand flower children. NBC news dispatched a camera crew to cover the event. We appeared on the Huntley- Brinkley report for the 6:00 news playing our crowd pleaser, 'Hey Joe.' The news was mostly favourable focusing mainly on the free nature of the participants.

The Hell’s Angels drew their share of attention and a few comments about their violent nature. The excitement in the Omnibus caused us to fantasize grander schemes. For a time we floated around Hollywood playing one free gig after another. We tried getting a position at the Whiskey A Go Go but the music policy was dominated by dance oriented bands. Scratch came up with the idea for a lengthy tour of the United States. Accomplishing a feat like that would need to be fully thought out. This we did without questioning the logistics of completing such an adventure.


We battled our way through a democratic list of possible band names settling on the Yellow Brick Road. Weeks later we spotted a marquis on Santa Monica boulevard advertising the debut recording of a group billed as the Yellow Brick Road. We played one more love-in under that name when one of the band members found a brochure promoting a show at the exhibition centre titled, The Great Western Exhibit. We decided we could live with that even though we had no idea what it meant. Consequently, it was kind of a stupid name. What were we? A traveling western rock and roll zoo?
Posted by Bill King at 10:12 AM